The linesman who made the remark has also been charged

A manager who directed his players to walk off the pitch after a match official made an allegedly racist remark has been suspended by his local football association.

Wythenshawe Town were playing Rylands in the Hallmark Security League on January 26 when a comment was made towards a black player, heard by four members of the squad in the dugout as well as manager James Kinsey.

After the incident, club chairman Chris Eaton told the BBC that the remark was: "without question of a racist nature."

The Manchester FA have since dished out punishments to both the linesman who made the comment and Kinsey, for "bringing the game into disrepute" by leading his team off the pitch in protest.

The Wythenshawe boss was fined and handed a seven-day suspension, ruling him out of their next match. The linesman was also sanctioned after his charge was proven. 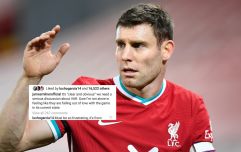 END_OF_DOCUMENT_TOKEN_TO_BE_REPLACED

"We don't think [Kinsey] did anything wrong, so why should we suffer?"

Both parties have seven days to appeal the decision with the Manchester FA affirming that they "strongly condemn discrimination of any kind", but they have faced criticism from anti-racism campaign groups.

Commenting on the charge, Kick It Out released a statement, saying that they were "extremely concerned".

It read: "Football is sending out the wrong signal when bigger fines are given to the victims of abuse rather than the alleged perpetrators."


popular
QUIZ: Can you identify these cities highlighted on a map?
Jurgen Klopp argues with BT Sport interviewer over kick off times
The JOE Friday Pub Quiz: Week 219
James Milner says he is "falling out of love" with football because of VAR
VAR would have disallowed Maradona's solo goal vs England, BT Pundits say
Donald Trump paid $3 million for recount that uncovered more Biden votes
QUIZ: How well can you remember the movie Elf?