"It is painful, it hurts." - Neymar hits back at 'diving' claims

"Do you think I want to suffer tackles all of the time?"

After spending most of his time in Russia rolling around on the floor in (mock) agony, Neymar has hit back at those who have criticised and poked fun at his theatrics. 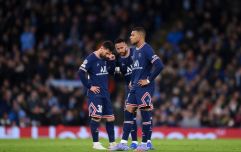 END_OF_DOCUMENT_TOKEN_TO_BE_REPLACED

The Paris Saint-Germain star was unable to help Brazil beyond the World Cup's quarter-final stage in summer and was mocked for his tendency to seemingly make out every bit of contact from an opponent was a career / life-threatening injury.

Although Neymar insists he took the reaction of those watching "with a humour," he stressed the treatment he receives from opponents is no laughing matter.

A reminder of what Neymar looks like when upright

"Do you think I want to suffer tackles all of the time?" he's quoted as saying by Sky Sports. "No, it is painful, it hurts.

"After the games I stay back for four or five hours putting on ice, it's complicated but if you haven't experienced that you will never understand. I saw [the jokes], but I took them with a humour.

"Even yesterday I posted on Instagram a joke with the children about it. My football is to dribble, to face the opponent, I can't stand in front of the opponent and say 'my dear, excuse me I want to score a goal', I can't do that. 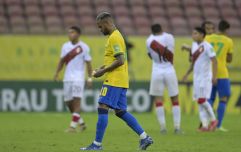 END_OF_DOCUMENT_TOKEN_TO_BE_REPLACED

"I have to dribble past him, I have to try to do something and he will not allow me to go past and he will try to foul me. A lot of time I'm faster and lighter than other players and they tackle me, and the referee is there for that."

Neymar has been linked with a move to Real Madrid this summer, with some reports saying the European champions would like him to replace Cristiano Ronaldo.

Real have since denied such claims and the 26-year-old now looks likely to stay put in Paris... so long as he remains the undisputed star player, that is.