Images of Newcastle United's 2019/20 home kit have been leaked

Leaked kit news anyone? Yeah, go on then...

Ignore for a minute, if you will, that this is a time of year when we football fans are blessed to have a seemingly never-ending supply of live football on our televisions. 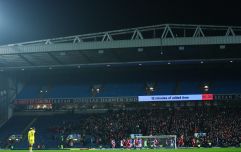 END_OF_DOCUMENT_TOKEN_TO_BE_REPLACED

Yes, title races and relegation scraps are hotting up, yes, the Champions League is back from its Gazprom-sponsored winter break and yes, there's still a chance of some rubbish teams beating considerably better ones in the FA Cup... but this is also high season for leaked poor-quality images of next season's football kits doing the rounds on the internet.

With that in mind, we bring you word - or, more specifically, pictures - of what is rumoured to be Newcastle United's next home shirt.

According to FootyHeadlines - a website which is always extremely reliable on new kit leaks - the black and white striped(!) shirt is due to be released by PUMA in July.

It features two white stripes across its middle and back, with the rest of the shirt to be black. The Newcastle crest and PUMA logo will also appear on the black stripe which runs through the middle of the shirt's front.

The other significant change to shirt is its collar - a white and black crew neck being added for 2019/20. It's a little bit similar to this, from the late 1990s.