Newcastle came back from two down to beat Everton

Newcastle United completed a memorable comeback against Everton at St James' Park on Saturday afternoon, recovering from two goals down to win 3-2.

Rafa Benitez's side had fallen behind with little over quarter of an hour played, Dominic Calvert-Lewin glancing home Lucas Digne's cross.

The home side might have drawn level soon after when Jordan Pickford brought down Salomon Rondon for a penalty. The England goalkeeper was fortunate not to be shown a red card for the incident but atoned for his error by saving Matt Ritchie's spot kick.

That save appeared crucial for Marco Silva's side, who went down the other end and doubled their lead through Richarlison - the Brazilian tapping home after Martin Dúbravka could only parry André Gomes' cross. 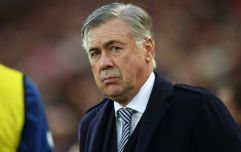 What is 'Everton'? A series of questions, answered

END_OF_DOCUMENT_TOKEN_TO_BE_REPLACED

Newcastle eventually got back into the game with 25 minutes to go, Rondon thumping home past Pickford after being played through by Ayoze Perez.

Perez would later level the scores with ten minutes remaining, coolly tapping home from close range after Pickford beat a fierce strike from Miguel Almirón into his path.

Then, with just six minutes of normal time remaining, Perez found what proved to be the winner. Isaac Hayden's ball over the top of the Everton backline was nudged into his path by Rondon; the Spaniard making no mistake from eight yards.

The comeback complete, Newcastle were able to see out the remaining minutes to record their fifth successive home victory.


popular
QUIZ: Identify the brand from just its slogan
Here's the full list of McDonald's reopening this week
The JOE Friday Pub Quiz: Week 193
Here's what they don't tell you about being a contestant on Pointless
WATCH: Muhammad Ali's perfect reply to being told 'not all white people are racist'
Boris Johnson challenged to say 'Black Lives Matter' in parliament
21 British game shows ranked from worst to best