Chelsea defender Matt Miazga has made a huge step signing terms with the Premier League champions.

The 20-year-old has spent his career with the New York Red Bulls, starting out with the MLS outfit's Under-14 team, but has now completed a £3.5m move to England. 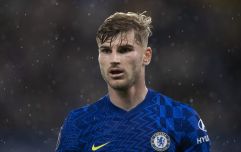 END_OF_DOCUMENT_TOKEN_TO_BE_REPLACED

Miazga has looked mature for his age on the pitch, and this has also shone through in a letter of thanks to the Red Bulls fans - and everyone at the club - for their support over the years.

'I am forever grateful for my time at Red Bull for providing me with the opportunity to grow and develop into the player I am today,' he wrote.

"Thank you also to Red Bulls Supporters for everything over the last three years"@MattMiazga3#goodluckMATT#RBNY pic.twitter.com/sqNuzQAeiZ