Cardiff City have not exactly covered themselves in glory over the past few days.

Earlier this week, Cardiff captain Sean Morrison was criticised for his foul-mouthed rant which he aimed at several Derby County players. 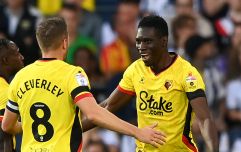 END_OF_DOCUMENT_TOKEN_TO_BE_REPLACED

The intensity of the Championship promotion battle is perhaps getting to the Bluebirds players and, on Friday night, they squandered two gilt-edged chances to take something out of their clash with table-topping Wolverhampton Wanderers.

Ruben Neves gave Wolves the lead but, on two occasions in injury time, the hosts had the opportunity to draw level thanks to a pair of penalties awarded by referee Mike Dean.

Gary Madine saw his spot-kick saved by Wolves' goalkeeper John Ruddy before Junior Hoilett rattled his off the woodwork and Cardiff suffered were forced to swallow the bitter taste of home defeat.

The result clearly got to Cardiff manager Neil Warnock, who refused to shake hands with Wolves' boss Nuno Espirito Santo after the final whistle.

END_OF_DOCUMENT_TOKEN_TO_BE_REPLACED

The offered olive branch was not only declined but Warnock appeared to tell Nuno to "fuck off" for his troubles.

Warnock has had more than his fair share of run-ins with rival managers in the past so we hope Nuno won't take it to heart.

The fact that Wolves have one foot in the Premier League means he probably won't lose any sleep regardless.