Frenchman Mourad Aliev was disqualified in the men's super-heavyweight Olympic boxing earlier today, a decision that saw the 26-year-old stage a sit-in protest following the end of the fight. 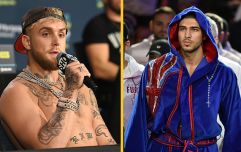 END_OF_DOCUMENT_TOKEN_TO_BE_REPLACED

The aftermath made for a slightly uneasy watch, as his disqualification wasn't announced until after the fight had concluded and the referee lifted the hand of his opponent, Team GB's Frazer Clarke, to declare victory. This was his reaction - safe to say, he was not a happy bunny:

Frazer Clarke beat Mourad Aliev after his opponent was disqualified...

The Frenchman was not happy 😳

As you can see, following the decision, Aliev proceeds to grab the camera and wag his finger down the lens, before going on to complain to the trainers, Clarke and the judges off-screen.

Aliev even went on to hold somewhat of a protest by staying sat on the edge of the canvas for some time, still clearly unwilling to accept the decision.

Clarke, who now progresses to the semi-finals of the event, spoke to BBC Sport following the tense finish to affairs. He noted how this is not only the "fourth time" the pair have fought but the "fifth cut" he has received "and not one of them has been [from] a punch]" following a scrappy bout which many will argue Aliev led for some time.

🗣️ "That is not how the sport should be done."

Frazer Clarke's reaction after his dramatic win by disqualification over Mourad Aliev.

It guaranteed the super heavyweight fighter at least a bronze medal in Tokyo. 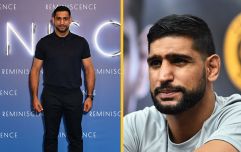 Amir Khan removed from US flight over face coverings row

END_OF_DOCUMENT_TOKEN_TO_BE_REPLACED

Most importantly, however, Clarke spoke well and it is yet another Brit advancing to the latter stages of this year's Olympics. Team GB picked two gold medals today alone, thanks to Charlotte Worthington and Max Whitlock, not to mention a number of victories in other events already notched in Tokyo 2020.

Here's hoping for a few more before the tournament closes out.

popular
Applications to appear on the next season of Gogglebox are now OPEN
Brothers stabbed younger sibling to death through car window in frenzied 30-second attack
Chinese whistleblower claims first Covid outbreak was 'intentional'
Man poos out of penis and ejaculates from bum due to health condition
Dad sacked his own son from family firm for refusing to get Covid jab
Insulate Britain protestor storms off GMB after clash with Richard Madeley
Vegan Bake Off contestant apologises after making non-vegan cake in first week
You may also like
Sport
Jake Paul vs Tommy Fury: Talks have begun, promoter confirms
Sport
Evander Holyfield still wants to fight Mike Tyson despite first-round TKO
Sport
David Haye calls out Tyson Fury after comeback win against Joe Fournier
Sport
Evander Holyfield TKO'd by Vitor Belfort in first round as fans chant for Trump
News
Donald Trump says he'd knock out Joe Biden in a boxing match
Next Page