Money for nothing: 5 players who made a fortune sitting on the sidelines

Every team has that one player who is rotting away on the bench costing an absolute fortune.

Whether it's a former star who has passed his prime or the next big thing that never was, these players are rewarded with the kind of money we can only dream of for seemingly putting in the bare minimum.

Here are the five worst culprits: 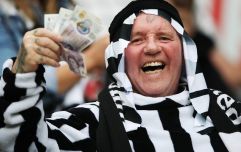 END_OF_DOCUMENT_TOKEN_TO_BE_REPLACED

Probably the most infamous case of the money-making bench-warmer, Winston Bogarde made just nine appearances in his four years at Chelsea between 2000 and 2004.

The defender arrived at Stamford Bridge with an impressive CV, having won the Champions League with the legendary Ajax team of 1995 before spells at AC Milan and then Barcelona under Louis van Gaal.

Earning a reported £40,000 a week during his spell with the Blues, Bogarde insisted on honouring his contract despite being forced to train with the youth team.

"This world is about money, so when you are offered those millions you take them," he explained.

"Few people will ever earn so many. I am one of the few fortunates who do. I may be one of the worst buys in the history of the Premiership, but I don't care."

In a way, you have to admire him for it.

While Bogarde earned his Chelsea contract after half a decade of top-level football, NFL quarterback Matt Flynn's pay day arrived on the back of a single game.

After spending four years as a back-up quarterback for the Green Bay Packers, Flynn finally got his chance at the end of the 2011 regular season in a meaningless game against the Detroit Lions.

END_OF_DOCUMENT_TOKEN_TO_BE_REPLACED

With starting quarterback Aaron Rodgers rested, Flynn stepped in and threw for six touchdowns - the most any Packer has ever thrown in the team's 96-year history.

Flynn returned to the bench as Rodgers brought home the Superbowl, but that one performance was enough to earn him a $20m contract with the Seattle Seahawks - $9m of which was guaranteed.

It turned out to be a terrible mistake by the Seahawks as Flynn was beaten to a starting spot by rookie quarterback Russell Wilson.

His journeyman career continued, with his total earnings coming to a staggering $18m to date - despite averaging just one start per season in his career.

We would forgive you if you'd completely forgotten that Seth Johnson existed, but Leeds fans will still remember his time at Elland Road.

Johnson's transfer was the epitome of everything that was wrong with Leeds in the early 2000s. His contract negotiations became the stuff of legend after the club apparently paid almost three times what Johnson demanded in the summer of 2001.

Going into negotiations, Johnson's agent apparently informed the player that he could expect a raise on his £5,000-a-week wages to around £13,000. As they sat down to negotiate with Peter Ridsdale, the Leeds chairman made his opening offer: "I'm sorry, I can only offer you £30,000 a week."

Shocked by the massive offer, Johnson's agent reportedly said nothing for a few moments. Ridsdale panicked, thinking he had insulted him with such a low offer, and quickly upped the offer to £37,000. Jackpot.

The former England international (that's right, Peter Taylor handed him a substitute appearance against Italy in 2000) failed to live up to the hype after injuries stalled his progress.

Cash-strapped Leeds found it difficult to find a buyer because of Johnson's high wages and injury history. But they also couldn't afford to play the midfielder because of a contract clause that guaranteed £250,000 to Derby for every 15 appearances he made.

He eventually left after making 53 appearances in four years, returning to Derby on a free transfer.

Baseball is probably the only sport in the world with contracts more ridiculous than football. Just this year, Giancarlo Stanton signed a 13-year contract with the Miami Marlins worth an eye-watering $325m (£207m).

While the Marlins wait to see if their enormous investment is worth it, they are probably hoping that Stanton performs better than former New York Yankee Carl Pavano.

When the Yankees signed Pavano for the 2005 season, they handed him a $39.5m (£25.2m), four-year deal. The former Marlins pitcher had apparently turned down bigger offers from around the league in order to sign for New York.

Pavano would stay in New York for the entirety of the contract but only appeared in 26 of the 661 games the Yankees played over those four years as team-mates began to openly question his commitment to the team.

At one stage in 2007, the Yankees asked Pavano to accept a minor league contract in order to save money and more accurately reflect his place in the team. Pavano agreed to consider the offer, but unsurprisingly he refused.

Eventually his contract ran out at the end of 2008 and he left New York a very rich man.

Mario Balotelli is probably the most familiar name on this list and his inclusion is also the most frustrating.

The Italian has the potential to be one of the most feared strikers on the planet. His size and strength are exactly what you look for in a footballer. Oh, and he's got one hell of a shot on him too.

Unfortunately for Super Mario, he just can't seem to settle. At the age of 25, Balotelli should be entering his prime years but instead spent last season fighting with Rickie Lambert for game time.

Brendan Rodgers has made no secret of his frustration, with the striker apparently refusing a move away from Anfield in order to claim a loyalty bonus in his contract.

But this isn't the first time Balotelli has been frozen out of a club. Back when he was at Inter, he fell out with then-manager Jose Mourinho who shipped him off to Manchester City in 2010.

Balotelli's good start in Manchester eventually faded away and his off-the-field behaviour became too much for Roberto Mancini, who sold him to AC Milan. He once again started strongly with Milan, convincing Liverpool to make a £16m move.

But now the Italian again finds himself the odd man out, unwanted at a club who can't seem to find a buyer. Perhaps he will finally really ask himself "Why always me?" and come up with the right answer this time.