Scotland fans were left fuming, 25 minutes into their side's Six Nations clash with France, when Melvyn Jaminet clattered into Sam Skinner. On first viewing, it looked as though there was a case to answer.

END_OF_DOCUMENT_TOKEN_TO_BE_REPLACED

Les Bleus were 12-3 up after early tries for Paul Willemse and Yoram Moefana, when the incident occurred.

There was a tip-on pass towards Skinner that may have thrown Jaminet, the France fullback. He was committed to the hit on the Scotland lock, but did look to pull back on going all-out with his tackle.

It was a reckless hit, though, and home fans at Murrayfield were seething when the referee called out 'Play on'. Damian Penaud could well have raced on to score from the France counter-attack that ensued, only for a poor kick on to let the Scots off the hook.

However, as fans howled, the Television Match Official called the ref's attention to the Jaminet thump on Skinner. After watching the first replay back, former Wales captain Sam Warburton said, on BBC, "It looks like a flying head-butt from WWE."

END_OF_DOCUMENT_TOKEN_TO_BE_REPLACED

Replays were slightly kinder to the France No.15, though. He did barrel into Skinner, in the air, but there was no head contact. Warburton did pull back on that initial comment as replays should it was more of a case of Skinner getting walloped in the chest.

In the end, it was deemed a penalty, leading to further discontent from the home fans that wanted a card. 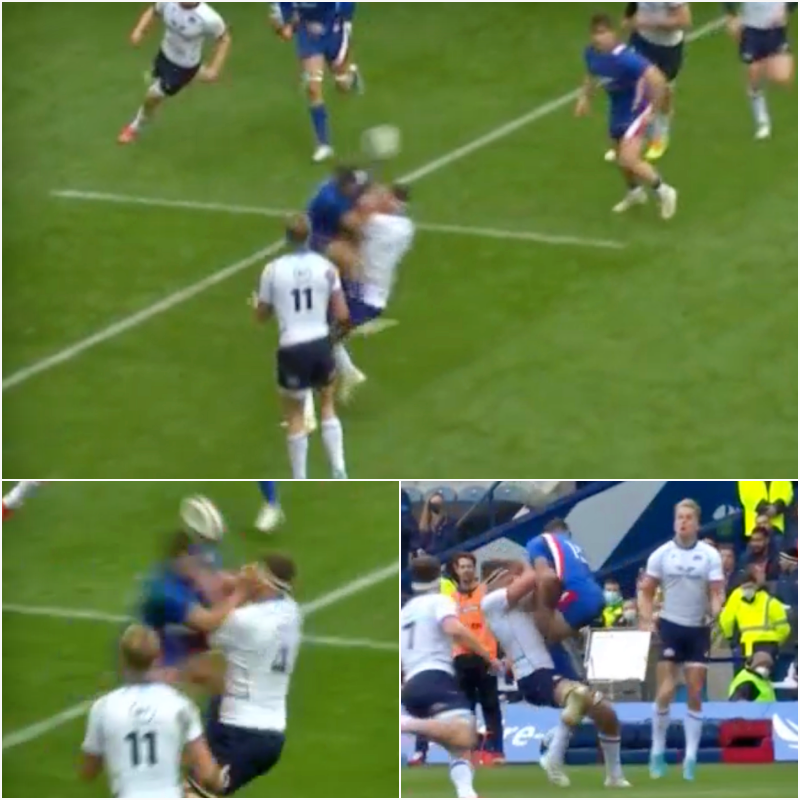 The Scots took full advantage of the penalty they were awarded for the Jaminet incident. They kicked for an attacking lineout and, three minutes later, were rewarded for their efforts when Rory Darge got over for a try.

The Scots could well have went into at half-time in the lead, only for them to botch a three-on-one after a super Duhan van der Merwe break.

A big moment at Murrayfield... and it hasn't gone Scotland's way.

We often hear about 'a game of two halves'. This thrilling first half was all France for the first 20, then Scotland fighting back in style.

And then... right as the half wound down, Gael Fickou got over for a try that was converted by Melvyn Jaminet himself.

The second half saw France add three more tries - Damian Penaud helping himself to a couple - as they consolidated their place at the top of the Six Nations standings.

popular
Multiple fatalities after planes collide mid-air over airport
Former Playboy Bunnies detail what it was like having unprotected orgies with Hugh Hefner
Pilots fly over destination airport at 37,000 feet - because they were both sleeping
Incredible case of the only known individual whose parents were two different species
Man plunges to his death after drawbridge opens as he was crossing it
Gerard Butler breaks silence after death of 'brother in arms' Darius Danesh
'I was close to calling in' - Jurgen Klopp hits back at Gabby Agbonlahor over Man United comments
You may also like
Sport
Man United linked with their 13th player in the last 24 hours
Sport
Chelsea to investigate alleged racist abuse aimed at Heung-min Son
Sport
Glazer family could sell minority stake in Man United
Sport
Cristiano Ronaldo cautioned by police over phone incident
Sport
Man United considering loan move for Christian Pulisic
Next Page