Smoking is bad for you, but Maurizio Sarri loves cigarettes

Smoking has been banned in football stadiums in Britain for more than a decade, generally because they are extremely bad for you (possibly even the worst thing for you), they smell bad and can cause fires. Perhaps someone should have told Maurizio Sarri this before he took the Chelsea job.

Sarri loves a smoke, he really does. He loves a smoke more than the Marlboro Man, more than Menthol Moose; the face and horns of The Simpsons' Laramie cigarettes. He just loves it.

In Italy this was fine. You're allowed to smoke in Italian football stadiums and Sarri - during his time managing in his native land - would take advantage of this regularly by having a smoke when a conceded goal had made him stressed, having a smoke to celebrate a goal or simply having a smoke because it had been five minutes since his last one.

That simply cannot happen in England however so, aside from doing a Wojciech Szczęsny and sneaking off to the showers for a cheeky, he has been left with no option but to ignore his nicotine needs during matches.

This must be tough for the former Napoli manager, because football is stressful. It's the reason people bite their nails during games and it's the reason people smoke during them as well, and it is also the reason that Sarri was pictured chewing on a cigarette during his side's opening Premier League game away to Huddersfield Town. 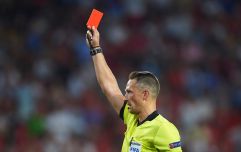 END_OF_DOCUMENT_TOKEN_TO_BE_REPLACED

Since coming to international attention thanks to his former side's slick and relentless brand of attacking football, Sarri has been lauded as an innovator, but it truly 3018 thinking to decide that, rather than wait two hours for a cigarette, it is simply better to chew on it to release the nicotine.

This prompts many questions, such as: what are you doing? Can you please stop doing it? Does nicotine release into the body just by chewing on a cigarette? And the most crucial of all: do you realise you've got flakes of dry tobacco all over your teeth?

Will we ever get these answers? Who knows.

You may also like
Sport
QUIZ: Name the 25 clubs relegated from the Premier League more than once
Sport
This is how much every Premier League has lost during lockdown
Sport
Nine Premier League clubs asked CAS to uphold Man City's European ban
Sport
Manchester United post ad for first team goalkeeping recruitment specialist
Sport
The Story of Arsenal's Banter Era
Next Page