To be honest, the halftime show at Super Bowl LIII was (or should have been) a welcome break

By the end of the second quarter in Atlanta only three points had been posted, all of them to the New England Patriots, who took a slender lead over the Los Angeles Rams to the locker rooms.

END_OF_DOCUMENT_TOKEN_TO_BE_REPLACED

Those inside the Mercedes-Benz  Stadium - along with hundreds of millions at home -were in need of a few minutes' distraction from a painfully dull first half.

Maroon 5 were tasked with providing it, though their halftime show performance, which featured cameos from Travis Scott and Outkast's Big Boi, didn't go down too well.

One of the highlights(?) was a special tribute to Spongebob Squarepants, with a short clip of Sweet Victory - the song performed  by the cast of the Nickelodeon cartoon in an episode from 2001 - featured during the halftime show.  That much-loved episode, named 'Band Geeks' sees Squidward tricked into forming a marching band for the Bubble Bowl, a parody of the Super Bowl.

Fans of the show have tried to get a performance of Sweet Victory included in the Super Bowl half-time show for years without success. This year, however, following the death of the show's creator, Stephen Hillenburg, a petition requesting Maroon 5 perform it passed 1million signatures. 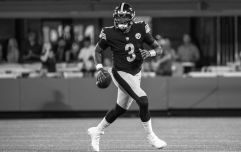 END_OF_DOCUMENT_TOKEN_TO_BE_REPLACED

As it went, Maroon 5 didn't actually perform it, despite lots of people seeming to think they would. They did, however, include a brief tribute clip - though this didn't stop the obvious disappointment of Spongebob/ general meme fans the world over.

What the hell happened to "Sweet Victory"??? You made me watch the halftime show just to get only half a second of Spongebob?? @NFL @maroon5 I demand answers and an apology pic.twitter.com/z0oPqgYxrv

Lackluster at best. How many people signed the petition to have the SpongeBob song and it not happen? Could have been cool to honor the man who created it. Poor choice all around.

What the fuck was that!? You've not only disrespected us, who were lied to, but you disrespected the late, great Stephen Hillenburg. Shame on you. @maroon5 #SpongeBob #SuperBowl