Everton threw away a two-goal lead at St James' Park

A furious Marco Silva was seen confronting referee and his assistants after Everton lost 3-2 to Newcastle on Saturday.

First half goals from Dominic Calvert-Lewin and Richarlison had seen Silva's side go in two goals up at half-time, with Jordan Pickford saving a Matt Ritchie penalty shortly before their second goal.

Newcastle rallied in the second half, pulling one back through Salomon Rondon before Ayoze Perez grabbed a late double to make it 3-2.

Marco Silva is NOT happy! 😠

After losing a 2-0 lead to be beaten by @NUFC, the @Everton manager vents his frustrations to the referee on the pitch at St. James' Park! 😤

Speaking to the BBC after the game, Silva bemoaned his side's failure to kill of the game during the early stages of the second half and also complained at the officials for not picking up an offside in the build up to one of Newcastle's goals. 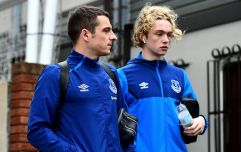 END_OF_DOCUMENT_TOKEN_TO_BE_REPLACED

"Even in the first 15 to 20 minutes in the second half we had counter-attacks - we had to kill the game in that moment.

"I cannot understand - five Newcastle players were in the same line and Rondon was offside."

Newcastle's win was their fifth successive victory in the league at home, the kind of form which could prove important in their hopes to avoid relegation in the final weeks of the season.

Everton's defeat leaves them 11th in the Premier League, falling behind Leicester City after their win at Fulham.