Because what they have is not enough.

Manchester United trail their neighbours Manchester City by 14 points at the time of writing, with City looking like they will run away with the title and break several records in the process.

José Mourinho has his catalogue of excuses of course, such as the £300m United have spent since his arrival not being enough to rebuild a squad capable of winning the Premier League. We should therefore expect United to splash the cash on reinforcements in the January window.

One area in which they are not blessed with tremendous depth beyond the obvious starters Nemanja Matić and Paul Pogba is central midfield. Ander Herrera and Marouane Fellaini have shown they are not of the necessary quality to be regular starters for Manchester United.


Mourinho is looking to bolster United's midfield with the signing of Andre Gomes, according to Don Balon. The Portuguese midfielder has struggled to pick up minutes at the Camp Nou since his arrival in 2016, facing competition for the central midfield positions from the likes of Denis Suarez, Ivan Rakitić and Andrés Iniesta. 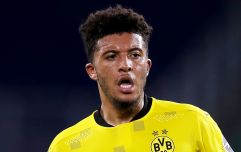 END_OF_DOCUMENT_TOKEN_TO_BE_REPLACED

However, still only 24 years old, Gomes still has time to fulfil the potential he showed at Benfica and Valencia. With the ability to play in a variety of midfield roles, and boasting an imposing physical stature, we would theoretically be a shrewd signing for United.

An extra central midfielder to play alongside Maticć and Pogba could free up the latter to attack with even more freedom without leaving gaps for the opposition to expose on the counter-attack, too.

It's a transfer that would benefit all parties involved, should it go through.