One budding creative has designed football kits for the UK's biggest supermarkets, including Tesco, Sainsbury's, ASDA and Morrisons.

Should the biggest supermarkets ever turn their back on retail for a move into professional sport, at least they have a ready-made kit supplier at hand.

In addition to each kit concept, Parton outlined his thought process behind each design.

Let's take a look at the supermarket football kits in further detail.

👕@Tesco:
Home shirt is inspired by their iconic carrier bag, while the away kit is a nod to the high-vis jackets worn by delivery drivers. #SupermarketShirts pic.twitter.com/qpyp5Prs0N

First up is Tesco, which Parton says "is inspired by their iconic carrier bag, while the away kit is a nod to the high-vis jackets worn by delivery drivers".

There are shades of Brighton about the home strip. The away kit is reminiscent of Man City and Barcelona third kits from recent years - namely in that it resembles an ice lolly.

A tidy pin-stripe design for the home shirt, and an away shirt based on the staff uniform. I thought about making a “sweet as nectar” comment but decided against it. #SupermarketShirts pic.twitter.com/z0zspx7TNr

Sainsbury's kit has more than a touch of the AS Romas about it.

A resourceful use of the same template for both kits, here. That’s ASDA price! *pocket tap* #SupermarketShirts pic.twitter.com/5LiNPsVhUV

ASDA's kit strongly resembles Forest Green. Not bad, but Forest Green are the UK's first plant-based football club, serving only vegan food at their ground. Could ASDA commit to that?

Next up is Morrisons.

This northern powerhouse will be kitted out in their famous green and gold. I can see that away shirt selling well in the Leeds area, too. #SupermarketShirts pic.twitter.com/6VTqY5Km2O 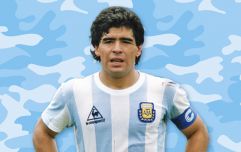 END_OF_DOCUMENT_TOKEN_TO_BE_REPLACED

What this kit is missing is a mention of the salad bar. That's the only reason anyone actually goes to Morrisons, right?

Yes, I've got four boiled eggs squeezed into a Tupperware box along with seven different varieties of pasta. Leave me alone. If that's the stadium food or pre-match meal, count us in.

Moving on to The Co-op's design, Parton hopes "these two kits 'cooperate' well with each other this season". Let's leave that there and move on to the next one.

A cool blue look for the shop round the corner. Hopefully these two kits “cooperate” well with each other this season... #SupermarketShirts pic.twitter.com/gTIor4jFqy

A fiery home shirt and an icy white away number. That victory vs England seems a distant memory. #SupermarketShirts pic.twitter.com/CX1NEvR1zS

With Iceland's strip, the designer says it combines "A fiery home shirt and an icy white away number. That victory vs England seems a distant memory".

M&S. The home jersey is forgettable, but the Percy Pig away strip is world class.

Now we move on to Waitrose, a.k.a the Fulham of supermarkets.

Put down that papaya and get these in your basket. Although you may need to go without your cashmere toilet roll for a week to afford all three. Elite. #SupermarketShirts pic.twitter.com/hSwl9cawCh

This design is, like one of its most prominent colours, beige. Waitrose meal deals are also vastly overpriced - much most summer signings who end up at Craven Cottage.

Lidl already has footwear made in its colour scheme, so why not a football kit?

A simple yet iconic home shirt, and that away kit is a “lidl” bit naughty. It tracks your heart-rate as your shopping comes flying through the checkout. #SupermarketShirts pic.twitter.com/bw8EW0zBIH

If Lidl was a football club, they'd punch above their weight with a squad comprising bargain European imports. Think Brentford, David Wagner's Huddersfield and before that - Swansea under Roberto Martinez.

Why pay big bucks for the largest brands, when there will always be a cheaper version from Austria that does the same job?

Last but not least, we've got Aldi.

Everyone’s “second club” (but you never want to admit it). The home kit mirrors the staff uniform, whilst the away kit is straight from the middle aisle. Sehr gut. #SupermarketShirts pic.twitter.com/VPSlALYFdp

The best has been saved till last, it seems.

The away kit alone wins hands down, but the home jersey is quite smart too. Aldi's midfield three would definitely comprise a pair of scuba diving goggles, a camping chair and a pack of Moldovan biscuits.