Macclesfield Town stadium for sale for less than a London house

This could well become the norm very quickly

Macclesfield Town's old stadium has been put up for sale on property website Rightmove, with the price listed at "in excess of £500,000," less than the average price of a house in London.

Macclesfield were given a winding up order by the High Court, with debts to their creditors reaching £500,000, and the club became the latest in the lower leagues to cease to exist.

Fans of the Silkmen lay most of the blame at  Amar Alkadhi, a London-based Iraqi telecoms entrepreneur, who bought the club in the mid-noughties.

Alkadhi removed a local business as shirt sponsor and was ultimately responsible for the departure of long serving manager John Askey, who was owed more than £170,000 by the club and by extension Alkadhi.


They have had reasons to be proud of their club, hiring three black managers in recent years, including Sol Campbell, who steered the club away from relegation but walked away, citing £180,000 in unpaid player wages. 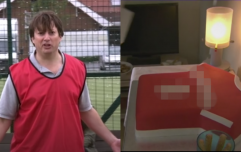 QUIZ: How well do you remember the football references in Peep Show?

END_OF_DOCUMENT_TOKEN_TO_BE_REPLACED

The Covid-19 pandemic was the straw that broke the camel's back for Macclesfield and could prove fatal for many more clubs towards the bottom of the pyramid, in spite of the government's bailout fund.

That their stadium is now being flogged on RightMove to whoever will pay half a million quid for it is a tragic indictment on football's neglect of the lower leagues, which provide so many with so much happiness but do not have the global appeal of the Premier League brand and are therefore discarded as disposable by those at the very top of the game.

The best we can hope for as a footballing community now is that the stadium is bought and used to house a phoenix club, starting from scratch while retaining the soul of the old outfit.

However, given the current financial climate and the uncertainty around when clubs will be able to admit fans into stadiums at full capacity, that seems increasingly unlikely.


popular
QUIZ: How well do you remember the football references in Peep Show?
FA launch new diversity code to promote BAME and female representation
Extinction Rebellion confront David Attenborough at his home after he criticised the group
Mesut Ozil surprises schoolchildren with free school meals
Chernobyl is officially the most addictive TV drama, study finds
Everything your football boots say about you as a player
Marcus Rashford set to miss out on BBC Sports Personality of the Year