But it could turn out to be an absolutely inspired decision for Leicester City fan John Pryke.

Back in August, most people would probably have gutted themselves laughing at the thought that the Foxes could actually win the Premier League.

The owner of Newly-promoted Leicester City says the club will be in the top 5 of the Premier League within 3 years. pic.twitter.com/QVqMI2muq5

But not John - he went and put £20 of his hard-earned money on that exact outcome when the Foxes were priced at 5000/1.

It might have seemed like a crazy decision at the time to most of us - but there's a reason he stuck a purple beer token on his club to win the league.

"I remember when Greece won the European Championships in 2004," he told The Sun. 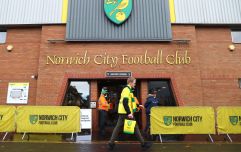 Leicester's game at home to Norwich postponed due to Covid

END_OF_DOCUMENT_TOKEN_TO_BE_REPLACED

"Lo and behold, they did. I didn't want to miss out like that again.

There are probably going to be a few squeaky bums in the Pryke household between now and May.