What a bizarre afternoon.

Leyton Orient's match with Colchester United was abandoned on Saturday afternoon as the home fans invaded the pitch and staged a sit-down protest against the club's owner Francesco Becchetti. END_OF_DOCUMENT_TOKEN_TO_BE_REPLACED

There was five minutes remaining in the League Two game at Brisbane Road when the home fans halted the game, which Colchester were leading 3-1. The Orient fans chanted "Becchetti out!" and the game was eventually abandoned after 40 minutes of the protest.

However, around 30 minutes after the match was abandoned, and the fans had left the stadium, the final five minutes of the game were played in a near-empty stadium in what amounted utter farcical football.

A sad farewell to the EFL. 😔 Leyton Orient play out fixture after telling fans a pitch invasion had caused the game to be abandoned. pic.twitter.com/JgjQ8l7zfe 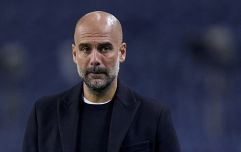 END_OF_DOCUMENT_TOKEN_TO_BE_REPLACED

Orient were relegated last week, ending their 112 year stay in the Football League. Saturday's match was their final game at home this season.

The London club was served with a winding-up petition over unpaid taxes earlier this year, and the future of the club remains in doubt. Becchetti, the club's deeply unpopular owner, has until June 12 to pay off the debts or sell the club.

Football journalist Iain Macintosh was there to cover the bizarre events.