Lewis Hamilton could leave Formula One to begin music career

Lewis Hamilton's Mercedes contract is set to expire at the end of the year but will likely sign a two-year extension to take him through to 2020. Then, it is believed, Liberty Media will be making extensive changes to make the sport more competitive. 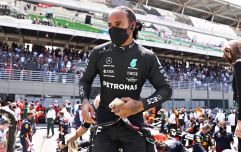 END_OF_DOCUMENT_TOKEN_TO_BE_REPLACED

It is at this point that Hamilton is rumoured to be leaving F1 as the most successful British driver in history to focus on a new career in music. He would be 35 years old at this point, and according to former driver turned commentator David Coulthard, could well turn to a career in music instead.

Could a collaboration with Sean Combs, sorry, P Diddy, sorry, Puff Daddy, sorry, Love a.k.a. Brother Love, sorry, back to Diddy, be on the cards?

According to professional Scotsman David Coulthard, it is a possibility. Speaking on the Graham Norton show Coulthard said: "I think it's got to be on his mind, I think that he'll go to 2020 which is [the end of] the current Concorde Agreement.

"That's the agreement between the commercial rights holder, the FIA and the teams. It defines how the sport looks and feels.

"But I think beyond 2020 there's every likelihood he may well be releasing his first [music] album which he's been working on."

END_OF_DOCUMENT_TOKEN_TO_BE_REPLACED

Meanwhile, in news about the thing he is actually good at and should continue doing at all costs, Hamilton is currently leading the Drivers' standings on 110 points after two wins in the Spain and Azerbaijan. German Sebastian Vettel isn't far behind on 95 as the race calendar continues with the Canadian Grand Prix this weekend.