The centre-back's move from Juventus to AC Milan, while triggered by a row with Juve coach Max Allegri, was thought to be an indication that Milan would return to challenging for the Serie A title.

Of course, it didn't quite pan out like that, and Milan once again failed to reach the Champions League spots and were banned from European competition after it was found that they had broken Financial Fair Play rules. The club have appealed for the decision to be overturned but it seems unlikely that UEFA will change their mind.

Therefore, it seems as though Bonucci is destined for the exit door after just one season at the San Siro. 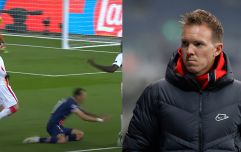 END_OF_DOCUMENT_TOKEN_TO_BE_REPLACED

Paris Saint-Germain are the frontrunners to sign the defender for a fee of around £35.5m, according to Calcio Mercato. The 31-year-old is understandably keen to return to playing Champions League football and will have to leave AC Milan to do so.

Bonucci's composure on the ball and ability to play line breaking passes will suit PSG's style well, while his experience playing in a back three at Juventus would give newly appointed manager Thomas Tuchel the option to change between systems, as he liked to do at Borussia Dortmund.

Manchester United were reported to be keen on the Italian defender, although their focus has turned towards Tottenham defender Toby Alderweireld. However, little progress has been made on that front. José Mourinho has admitted his frustration at the situation, saying: “I’m not going to say somebody is coming or nobody is coming. I really don’t know."


popular
James Milner says he is "falling out of love" with football because of VAR
QUIZ: Fill in the missing club from these players' career paths - Part 6
QUIZ: Can you identify these cities highlighted on a map?
The JOE Friday Pub Quiz: Week 219
Jurgen Klopp argues with BT Sport interviewer over kick off times
VAR would have disallowed Maradona's solo goal vs England, BT Pundits say
QUIZ: How well can you remember the movie Elf?