Jose Mourinho has sent Alfie Devine back to the youth team

The master of mind games is at it again

Spurs manager Jose Mourinho has banished Alfie Devine from the first-team squad, just days after the teenager became the youngest ever goalscorer in Tottenham's history. 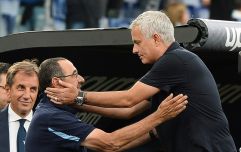 END_OF_DOCUMENT_TOKEN_TO_BE_REPLACED

Devine was born two months after Mourinho made his infamous 'Special One' speech when taking over at Chelsea. The youngster grew up in Warrington and played for the Liverpool and Wigan Athletic academies before moving south to join Spurs.

The 16-year-old bagged his first ever goal for Tottenham in Sunday's FA Cup win over Marine.

Devine cut in from the left before drilling a crisp, right-footed effort past the outstretched Marine goalkeeper. Not only did this make him Tottenham's youngest ever goalscorer, he also became the youngest player to have played for them in a senior match.

The goal put Devine's name in the spotlight - but his manager wants to ensure he remains grounded.

Mourinho has sent the 16-year-old "back to where he belongs", so the youngster doesn't get ahead of himself. Devine is believed to be training with Tottenham's Under-18 squad as normal this week.

#thfc Mourinho says he has sent Alfie Devine "back to where he belongs" in the U-18s for two to three weeks to bring him back down to earth after Marine goal. 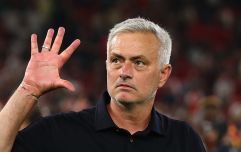 END_OF_DOCUMENT_TOKEN_TO_BE_REPLACED

The Portuguese had a similarly savage response when asked about Mesut Ozil in a press conference earlier today. In a recent social media Q&A session, Ozil said he would rather retire than sign for Spurs.

When Mourinho had this put to him, he simply replied: "Who told him that Tottenham was interested in him?"

Ozil flourished under Mourinho's management at Real Madrid, but he has been cast to the wayside at The Emirates. He is rumoured to be closing in on a move to Turkish giants Fenerbache.

As for Alfie Devine, the 16-year-old might have to wait a little while longer before he is a first-team regular at the Tottenham Hotspur Stadium.

popular
Boris and Carrie put south London home on the market for £1,600,000
Asda slammed for 'embarrassing poorer families' with new product redesign
Micah Richards winds up Roy Keane with Alf Inge Haaland joke
Runner finishes last in 400m race as penis keeps falling out of shorts
Inbetweeners star Joe Thomas has been in a relationship with his co-star for over 10 years
Massive piece of Elon Musk's spacecraft lands on farmer's property and could make him very rich
New heatwave this week will be longer than July's - and Brits told not to have barbecues
You may also like
Sport
Jose Mourinho claims managers at Man Utd are 'no longer expected to lift titles'
Sport
Rio Ferdinand apologises to Jose Mourinho after 2019 quote proved right
Sport
Jose Mourinho burst into tears after guiding Roma to Europa Conference League final
Sport
Lazio release statement to hit back at Jose Mourinho comments
Sport
Jose Mourinho is blaming referees after dropping points, again
Next Page