Much was expected of Henrikh Mkhitaryan when he joined Manchester United from Borussia Dortmund in the summer for £26.3m.

A couple of months later, and the Armenian forward has just a few substitute appearances to his name and has only made one start for the first-team, where he was hooked-off at half-time against Manchester City last month.

Mkhitaryan picked-up an injury on international duty in early September, but was said to be fit and expected to be involved in Wednesday's EFL Cup game against City at Old Trafford.

The 27-year-old wasn't even on the bench.

Henrikh "copy and paste" Mkhitaryan is facing a race against time to be fit for next weekend's derby https://t.co/DnSzqpOS7S

Reports also emerged this week claiming that Jose Mourinho and United's coaching staff are concerned about the player's suitability for the physical demands of the Premier League. The United manager was also accused of "humiliating" the player by omitting him from the squad for Wednesday's derby game. 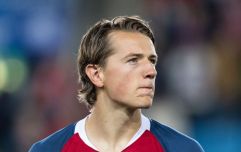 END_OF_DOCUMENT_TOKEN_TO_BE_REPLACED

However, Mourinho has offered something of a positive update on Mkhitaryan's situation. The United manager confirmed that the player is training with the team, and is "fit" by some definition of the word, but not by Mourinho's standards.

"He is not injured," the United manager said ahead of Saturday's game against Burnley.

"Sometimes I confuse the word 'fit' in the English language. Sometimes you can say that it is 'not injured', but you could also say that you are in great condition and ready to compete. That is different for me as we use different words in Portuguese for the different situations. Mkhitaryan is not injured, he is training with the team 100 per cent."

United fans who were looking forward to see Mkhitaryan in action will be heartened by Mourinho's comparison of the player's situation to that of Willian, who took time to settle at Chelsea before becoming a key player, and Angel di Maria at Real Madrid.

"Some players find it very easy (to adapt to English football) whereas others need more time. They need time to feel the intensity, the aggression, the game without the ball and the competitiveness.

"The realities are often different, particularly in terms of the competitiveness. It doesn't matter who you are against, you have to play at the highest level otherwise you will not be able to do it. Micki needs time to become the top player he knows he can be.

"I think Micki will work here for sure. I don't like to speak about players from other clubs because I don't want to be misinterpreted, but I don't think he'll mind. A player who had a problem to play when he first arrived was Willian. He went through a process and then, after a few months, he became a top player. Then, when we won the championship, he was phenomenal and still is. That is just an example.

"Similarly, Di Maria had to learn a lot about his game when he came into Madrid from Portugal. Sometimes this is what happens. It happens with defenders, but it is often easier for them to adapt than attackers. Some go straight to success and others it takes more time.

"In Micki's case the process was interrupted by injury, which does not help the process of evolution. Being out for a month meant he has had to go through the process of getting match fit, then once he has that he needs the competitive level to do it. We believe him and, sooner or later, there will be no problem."

However, Mourinho didn't confirm whether the player would be involved at Old Trafford for the Burnley game.

You may also like
Football
Sympathy for the devils? Why Manchester United don't deserve your pity
Sport
Is Ole Gunnar Solskjaer the worst manager in the league?
Sport
Roy Keane is angry at everything bar his own tedious punditry
Sport
Liverpool winning the league or: how I learned to stop worrying and love the bomb
Football
Ole Gunnar Solskjaer is the world's most expensive babysitter at Manchester United
Next Page