Some people think it shouldn't have stood

Former Swansea, Wigan and Sunderland star Jordi Gomez scored a sensational goal from his own half in the Europa League this evening. However, some believe the Spaniard's goal should have been ruled out.

Now 35, Gomez is captain of Omonia Nicosia. The reigning Cypriot champions are up against PSV Eindhoven in the Europa League group stages.

With the game tied at 0-0 in the 29th minute, Omonia were awarded a free kick just inside their own half after a foul on striker Michal Ďuriš by PSV's Jorrit Hendrix.

The ball was thrown back towards Omonia by the PSV players, as happens in football, to allow PSV's players to regroup before the free-kick was taken.

That was when FA Cup winner Gomez had other ideas.

The set-piece specialist stepped up and struck a sumptuous effort from his own half. The ball sailed at least 60 yards, whistling past the head of PSV goalkeeper Yvon Mvogo before settling into the empty net. 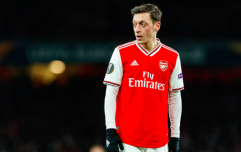 END_OF_DOCUMENT_TOKEN_TO_BE_REPLACED

However, many people are now questioning whether the goal should have stood - or whether it should have been ruled out.

This is because the ball was arguably still rolling when Gomez struck it.

According to the IFAB Laws of the Game, a free kick should be taken when the ball is at a dead stop.

Gomez' goal should arguably have been ruled out - and this was certainly the reaction among many on social media.

Should this not have been disallowed? Struck a moving ball from a set play?

Referee you’ve had a howler. Balls still moving before it’s hit. Looks like Roofe’ record has been burst already 😂 some strike