Not the start to management he would have been hoping for

Joey Barton's managerial career got off to a bad start this afternoon as his Fleetwood town side lost 1-0 to AFC Wimbledon on the opening day of the EFL season.

A goal from Joe Piggot gave Wimbledon the lead and the South London side held on for all three points.

Kwesi Appiah and Pigott both missed clear-cut chances in the first half, but Pigott made amends in the 60th minute moments after the Dons almost conceded to Tommy Spurr, only to be saved by Tom King between the sticks. 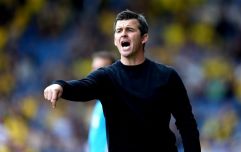 END_OF_DOCUMENT_TOKEN_TO_BE_REPLACED

Appointing Barton was a gamble for Fleetwood, given Barton's disciplinary record and his lack of experience, and the club will be hoping that Barton can inspire the team to bounce back from their opening day defeat when they travel to Oxford next weekend.

Barton has of course always had a soft spot for AFC Wimbledon and their fairytale story, so it's not all bad.

Its good to see AFC Wimbledon back in the league, a true fairytale story. It shows how powerful fans can be if motivated correctly