Joel Ward won't forget his most recent trip to the Etihad in a hurry.

The Crystal Palace right back was part of a team that found itself on the receiving end of a 5-0 rout courtesy of Manchester City on Saturday afternoon.

But the pain of such a defeat was almost certainly exceeded by the agony endured by Ward following a challenge from City winger Leroy Sane.

With the score at 3-0, Palace were awarded a free kick in City's half when Sane crashed into Ward, who quickly hit the deck.

As the cameras panned to the defender's face, blood could be seen streaming down his nose and on to the pitch.

When Ward glanced up to motion for medical attention, we all got a clear sight at just how badly his nose had been broken.

that nose is not going in the right direction pic.twitter.com/nrX37hywTf 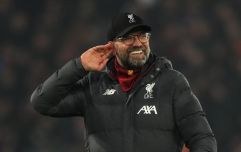 END_OF_DOCUMENT_TOKEN_TO_BE_REPLACED

With Palace having just used their third and final substitution of the game, Ward had no option but to soldier on for the remaining 15 minutes.

The referee kept his cards in his pocket and City went on to score another two before the full-time whistle.

It was not a good day for Palace supporters.

It was a worse day for Joel Ward.

That nose is truly spread across his face 👃🏼 definitely broken #MCICRY

Eugh Joel Ward's nose there 😷😷😷 That's so minging - how wonky did it go?! #MCICRY

Ward's nose is so bent from that. No point him carrying on when it's 4-0. Get those nose fixed

That must be a broken nose for Joel Ward. Horrible! #MANCRY

You may also like
Sport
How will Liverpool's new Nike shirts look next season?
Sport
The Carlos Tevez derby: A rivalry like no other
Sport
Jurgen Klopp's contagious mentality is creating a generation of Liverpool winners
Sport
Confidence in football and why strikers feed on it
Sport
Premier League flops of the decade - a combined XI
Next Page