He is one of the most recognisable faces on one of the most beloved football shows on British TV, but now the man known as Rocket is leaving Soccer AM to join JOE as Head of Sports Production. 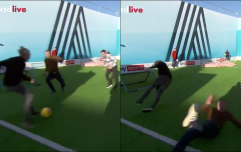 END_OF_DOCUMENT_TOKEN_TO_BE_REPLACED

Rocket has been with Soccer AM for 19 years, since starting work experience as a 15-year-old, and as a producer and presenter he has been an integral part of the sketches, skits and skills challenges that made the show a staple of Saturday mornings for football fans throughout Britain.

Now he joins JOE where he will work on a whole new slate of football-focused video series and formats for Facebook Live, YouTube, Periscope and Instagram.

“Rocket is a huge talent and we’re delighted to have him join the business. We’re racking up millions of daily original video views, across both editorial and branded, and can’t wait to have Rocket at the helm of our football-focused video content to take this to the next level”.

“We couldn’t be more excited about Rocket joining the business, says Will Hayward, CEO of JOE Media.

“At JOE, we’re absolutely convinced that original, premium TV-style content is the future of the social web, and feel we are the only outfit operating at scale in this space. Rocket joining is only the first of many, many new hires we are making as we look to double our team and start broadcasting on a daily basis to our audience of over 10 million on social”