Javier Hernandez is reportedly close to completing a move to Besiktas

Javier Hernandez's second stint in the Premier League appears to be nearing its end already.

The former Manchester United striker returned to England from Bayer Leverkusen in the summer, signing a three-year deal with West Ham.

However, the Mexican's future at the club has been the subject of speculation since David Moyes - who was his manager at Manchester United for most of the 2013/14 season - was appointed as West Ham boss. 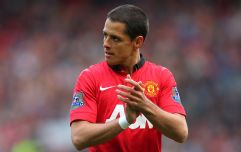 Javier Hernandez offers to play for Manchester United for free

END_OF_DOCUMENT_TOKEN_TO_BE_REPLACED

The latest report, this time from Goal, suggests he is close to signing for Turkish giants, Besiktas. The Istanbul club are said to be on the cusp of buying 'Chicharito' for a fee of around €8.5m (£7.5m) - less than half of the £16m fee they forked out for him in the summer.

Goal claim that Besiktas' chairman, Fikret Orman, is currently in London, holding advanced talks with West Ham regarding the sale of the striker. 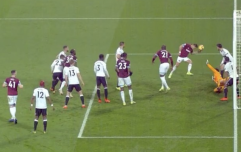 END_OF_DOCUMENT_TOKEN_TO_BE_REPLACED

Hernandez has occasionally been linked with a return to United - the club at which he was a popular figure with supporters for the role he played in winning two Premier League titles in 2011 and 2013. After struggling to play regularly for them when Moyes replaced Sir Alex Ferguson, he was eventually sold by Louis van Gaal in 2015 after a brief loan spell at Real Madrid.

popular
Multiple fatalities after planes collide mid-air over airport
Andrew Tate banned from Instagram and Facebook
Incredible case of the only known individual whose parents were two different species
Footage emerges of Andrew Tate getting knocked out during kickboxing bout
The JOE Friday Pub Quiz: Week 308
Court hears cringeworthy poems Ryan Giggs wrote to his ex
Rishi Sunak names his usual Maccies order - but it was withdrawn more than 2 years ago
You may also like
Sport
Javier Hernandez and some of his Mexican teammates have done a Romania '98
Sport
Manchester United target two forwards if they miss out on Alexis Sanchez
Sport
Manchester United fans want Javier Hernandez back at Old Trafford
Sport
Javier Hernandez responds to claims he's asked to leave West Ham
Sport
Javier Hernandez unsure if he'll uphold football's worst tradition against Manchester United
Next Page