Jamie Carragher checks into the doghouse with joke on Soccer AM

Jamie Carragher must have left his f*cks at home.

Carragher finds himself on commentary duty for Burnley's Premier League clash with Everton on Saturday afternoon and the cold up at Turf Moor did nothing to chill his sense of humour. 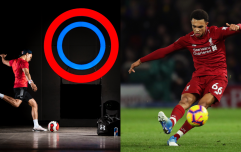 END_OF_DOCUMENT_TOKEN_TO_BE_REPLACED

The Liverpool legend was well wrapped up to cope with the elements and clearly wasn't looking forward to spending a few hours on the gantry.

"It's freezing!" Carragher said before taking the mick out of his punditry soulmate Gary Neville, who complained about the temperature while covering Manchester City's victory over Arsenal on Thursday night.

"What did he have? He had that big parka on, didn't he? Typical Manchester."

And while we're used to seeing Carra mock Neville and vice versa, the former Reds defender left the Soccer AM studio in stitches when he previewed the game and revealed his plans to keep warm.

Savage from @Carra23 this morning. pic.twitter.com/jAjaaXfW8a

"My missus gave me her tights this morning so I'm going to throw them on," he said.

"She doesn't watch Soccer AM."

To be fair, we'd imagine Carragher's wife would have to have a terrific sense of humour if she has to put up with the ex-England international on a daily basis.

popular
Neighbour cuts tree in half in classic display of British pettiness
Transgender runner CeCe Telfer ruled ineligible for Olympics
Britney Spears tells court father won't let her remove birth control
Both of Karim Benzema's goals vs Portugal were scored on the 46th minute, 44 seconds
University LGBT society disbanded after arguing feminists need to be 'reeducated' in gulags
Sex expert says these are the four words you should always say in bed
A definitive ranking of every swear word from worst to best
You may also like
News
Three men stabbed in 'fight' involving axe and Samurai sword on beach
News
Drug dealer caught after posting picture of Stilton cheese online
News
Family of 9-year-old killed by lightning donate his organs to save three other kids
Sport
Jürgen Klopp defends Solskjaer's team selection after Man Utd defeat
Football
Jamie Carragher hits out at Souness over 'lazy punditry' after United protest
Next Page