Christian Eriksen's future at Tottenham Hotspur remains up in the air amid uncertainty over his contract situation, and new reports suggest James Rodriguez could be the Dane's replacement at the heart of Mauricio Pochettino's midfield, according to reports.

Currently on loan at Bayern Munich, a big question mark hangs over James' own future given the local media reports of his disagreements with coach Niko Kovac and the apparent lack of space for him in the setup of his parent club, Real Madrid.

According to AS, this summer could see Los Blancos dangle Rodriguez at Spurs in an attempt to lower the asking price for Eriksen, which is set to remain high thanks to Daniel Levy's notoriously stingy approach to transfer dealings.


That is in the face of the midfielder's contract expiring at the end of next season, and reports suggest that little progress has been made on tying him down to a longer stay in North London. 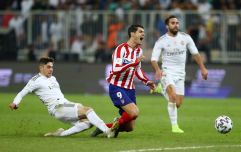 END_OF_DOCUMENT_TOKEN_TO_BE_REPLACED

Whether Spurs would be interested in Rodriguez remains to be seen, his wages in Madrid are likely to surpass the club's regimented structure and the prospect of Levy breaking the bank to sign him, or of James taking a pay cut, seem very remote.

Bayern have only been able to utilise their loanee once since he ruptured knee ligaments in early November, Rodriguez coming off the bench for a short cameo in the weekend win at Hoffenheim to account for only his ninth Bundesliga outing of the season.

Eriksen, meanwhile, is enjoying a strong campaign at Wembley Stadium with six goals and nine assists to his name in all competitions.