Everton supremo James Rodriguez could potentially make it as a boxer, according to Ryan Garcia. 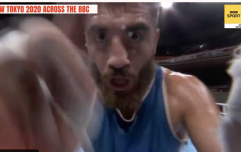 END_OF_DOCUMENT_TOKEN_TO_BE_REPLACED

Garcia was speaking to JOE ahead of his January showdown with British boxer Luke Campbell on DAZN.

Currently the WBC Silver lightweight champion and one of the highest-rated fighters in the world in his weight class, the 22-year-old was asked to name the footballers he thought could potentially make it in the ring.

For Garcia, the Everton and Colombia playmaker sprung to mind.

"There's actually a lot, but James Rodriguez I feel has got that little swagger, that movement done, coordination.

"I feel he's got that swagger that might help him out."

Garcia, who has recently trained alongside Saul 'Canelo' Alvarez, then went onto claim Cristiano Ronaldo could make a successful transition to boxing.

"Ronaldo's just a beast overall - as a specimen. You wouldn't want to step in the ring with him if he really knew his stuff because one, he's got the mindset and two he's so competitive."

END_OF_DOCUMENT_TOKEN_TO_BE_REPLACED

When asked if he supported a team, Garcia said: "I wouldn't say I support a team, no. But I do support Ronaldo's team.

"Me and him are pretty cool. He wants to go to one of my fights, so obviously I'm gonna cheer for his team. He shows me a lot of love and he's probably the most popular person in the world - he even DMs me on Instagram."

Garcia, who identifies with both American and Mexican heritage, said he enjoys football more for the players than the teams.

"I'm a pretty big soccer fan, but it's just the players I like.

"I only like watching it live, not on TV - but my favourite players are Ronaldo, Messi, Ronaldinho... and just the main ones."

popular
Tokyo 2020: Footballer guaranteed to be first trans and non-binary athlete to win Olympic medal
A definitive ranking of every swear word from worst to best
This is how Team GB is doing at Tokyo compared to Rio and London
Guy finds Aldi version of Hula Hoops in branded multipack
Met Office issue exact date for upcoming August heatwave
Here's how to see who's been taking screenshots of your Instagram Stories
IOC rules for transgender athletes in Olympics to be changed after Tokyo, officials say
You may also like
Sport
Tyson Fury fires ‘I pay taxes’ dig at Lewis Hamilton as he questions lack of UK honours
Sport
Muhammad Ali's grandson on the pressure of legacy and YouTube exhibitions
Sport
KSI says he started 'influencer boxing' and now wants to fight Jake Paul
News
Chris Eubank's son Sebastian dies in Dubai, aged 29
Sport
Deontay Wilder slammed for bench press technique
Next Page