With the Republic of Ireland set to kick-off the home campaign of their Euro 2020 qualifying campaign against Georgia, Irish news site RTÉ caught up with James McClean ahead of the fixture.

END_OF_DOCUMENT_TOKEN_TO_BE_REPLACED

A fiercely proud Irishman that has constantly had to defend his patriotic views, McClean's love for the green jersey has never been in doubt but like Rice, the Stoke City winger has also switched international allegiance since his younger playing days.

McClean played seven times for Northern Ireland Under-21s but turned down the opportunity to commit to their senior side.

The Derry winger made his debut for the Republic of Ireland senior team against the Czech Republic at the Aviva Stadium in February 2012.

At the time of the switch, McClean said: "I didn't feel part of the (Northern Ireland) squad. And I think any Catholic player if they said they did, I'd probably call them a liar.

"I didn't feel that way. It's probably strong words to say, but I felt that we weren't wanted. As a Catholic as well, it's hard to stand for that national anthem, and see all the flags, the sectarian flags and the chants as well. You don't feel part of that, especially me from where I grew up."

Niall Quinn has also been very vocal about his role in helping McClean declare for the Republic of Ireland - something that he's fully entitled to do under the terms of the Good Friday Agreement.

Despite Mick McCarthy getting his second stint as Irish manager off to a win against Gibraltar, the main story over the last few weeks has been Declan Rice's decision to declare for England. 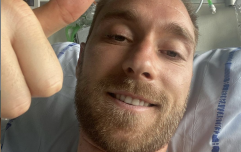 END_OF_DOCUMENT_TOKEN_TO_BE_REPLACED

The West Ham midfielder made three senior international appearances for Ireland in friendly matches before switching allegiances to England.

Rice featured for Gareth Southgate's side in their emphatic wins over the Czech Republic and Montenegro.

In an interview with RTÉ's chief football correspondent Tony O'Donoghue, McClean has made his feelings known.

"It's not just Declan, it's anyone else. If you're not proud to be here and we're a stepping stone then sod off and play for someone else. I'm an Irishman. I grew up on the island of Ireland, simple as that. We only want players here who want to play for Ireland, who feel Irish and are proud to be Irish."