The 19-year-old has impressed at Borussia Dortmund this season

The Borussia Dortmund forward's impressive form in Germany this season has seen him establish himself as a regular fixture in Gareth Southgate's England team and he has frequently been linked with a return to England in recent weeks.

Now, according to the Independent, Ole Gunnar Solskjaer wants to bring in Sancho as he builds a young, fast United side - combining him in attack with Anthony Martial and Marcus Rashford. 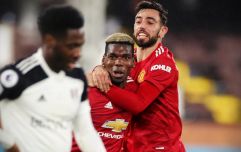 END_OF_DOCUMENT_TOKEN_TO_BE_REPLACED

It's expected United would have to pay upwards of £100m to bring the teenager back to Manchester. Should they agree a fee with Dortmund, City would also have to be notified as part of a 'matching clause' they insisted on when reluctantly sanctioning his move to Germany two years ago. This, the report claims, is not expected to stop United.

Sancho, who was part of Watford's academy before joining City's youth ranks, has three years left on his current deal in Germany. He is said to be in no rush to leave Dortmund, though a serious bid from United - or Paris Saint-Germain and Real Madrid, who are also thought to be interested - may accelerate his departure.

Dortmund currently sit top of the Bundesliga - two points clear of reigning champions, Bayern Munich. They were eliminated from the Champions League last month by Tottenham, who now face City in the quarter-finals.