Robert Lewandowski is a man with a sense of humour, that much we know.

The Bayern Munich striker is able to laugh at himself, as he showed with his reaction to JOE's very own take on his goalscoring exploits for the German champions last season. 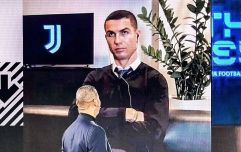 END_OF_DOCUMENT_TOKEN_TO_BE_REPLACED

He was laughing again after the results of the voting for this year's Ballon d'Or were announced, but we're not sure he was enjoying himself quite as much.

In addition to his 42 Bayern goals last season - including five in less than 10 minutes against Wolfsburg in the Bundesliga - he helped Poland qualify for Euro 2016 and led the line well as his country was unlucky to go out on penalties at the quarter-final stage.

Oh, and he already has 26 goals this season in as many games, including hat-tricks in three separate competitions.

So, while that might not have been enough to oust Cristiano Ronaldo from top spot and deny the Portuguese a fourth Ballon d'Or, surely he was close.

Well, the term 'close' is relative, but the Polish star found himself down in 16th place. 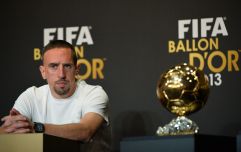 Five players who were robbed of a Ballon d'Or

END_OF_DOCUMENT_TOKEN_TO_BE_REPLACED

He was below Jamie Vardy. Below Pierre-Emerick Aubameyang. Below Zlatan Ibrahimović.

Now, those three all had great seasons, while the performances of Pepe, Rui Patricio and Arturo Vidal at international tournaments all saw them leapfrog Lewandowski, but he seemed befuddled.

Of course, this opened him up to a lot of differing opinions.

popular
Gary Neville points out the obvious about Digby, Lord Jones
Jamaica teammates produce hilariously frosty reaction to Thompson-Herah's 100m win
A definitive ranking of every swear word from worst to best
Mourad Aliev was not happy about being disqualified from the men's Olympic boxing
Here's how to see who's been taking screenshots of your Instagram Stories
Protestors call on Dublin Temple Bar pub to "come out and say sorry" over alleged assault
The JOE Friday Pub Quiz: Week 254
You may also like
Sport
Kingsley Coman and Robert Lewandowski reportedly trade punches during Bayern Munich training
Sport
Robert Lewandowski hammers Bayern Munich's tactics in loss to Liverpool
Sport
Borussia Dortmund board decide they will no longer sell players to Bayern Munich
Sport
Manchester United considering moves for Robert Lewandowski and Thiago Alcantara
Sport
Robert Lewandowski will be regretting this tweet he sent to James Rodriguez
Next Page