Is this the best uncapped England XI?

Every time we are deprived of our weekly dose of Barclays for some bland, predictable international qualifiers, football fans can't help but have the same debate around the squad selection.

There are two sides to this debate. On one side are the fans of various bottom half clubs, complaining that a player from their team has not been picked, claiming that the England side should be picked on form. On the other side, when these players - your Tyrone Mings, your Callum Wilsons - are eventually picked, fans complain that they are token call-ups and it's a waste of time picking players who probably won't have a long-term future in the England set-up.

Football fans are famously fickle, with opinions strongly entrenched in club bias, myself included. It's just the way we are. But there is a validity in these arguments; there are a lot of talented players with fewer England caps than their talent probably merits.

On that note, here is, in my humblest of opinions, the best uncapped England XI.

Barring one particularly embarrassing mistake against Liverpool, the Manchester United loanee has impressed between the sticks for Sheffield United this season.

Downplaying the Cup? Try telling Shrewsbury there shouldn't be replays

END_OF_DOCUMENT_TOKEN_TO_BE_REPLACED

If it weren't for the strength in depth that England have in this position right now, the Croydon born striker-turned-winger-turned-tackling octopus has stuck out like a sore thumb in the Premier League since his Crystal Palace debut as one of the few full-backs who excels defensively but can flatter to deceive going forward. In this team, that'd probably be quite useful given who we've got at left-back.

I initially had Lewis Dunk here, but he shockingly has one cap to his name, so Burnley’s Ben Mee it is.

Aston Villa's man mountain has been a key figure in their defence since he joined on loan from Bournemouth last season. This term, he has displayed great leadership in the way he marshals their backline, courage in his last ditch blocks and composure in his passing out from the back. He also has the added bonus of being left-footed. The Aldi Van Dijk is straight into this team. 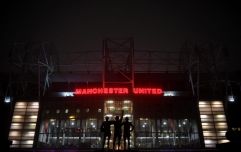 Sympathy for the devils? Why Manchester United don't deserve your pity

END_OF_DOCUMENT_TOKEN_TO_BE_REPLACED

Not really a left-back anymore, more of a wide attacker, but still capable of fulfilling this role in this team so we don't have to play Matt Targett there. He might not have played for Spurs yet in the Premier League, but he is destined for big things.

My colleague articulated the beauty of Mark Noble better than I ever could here, but in short: while it's fun to make jokes about him never receiving a call-up, in truth he has been unlucky not to make a senior appearance for the Three Lions. Given that Jack Cork, Jake Livermore and Joey Barton have all represented England, it is a crying shame that Nobes™️ has never had the privilege. In this team he has a lot of defensive work to do, but no challenge is too intimidating for this brave boy.

Southgate's reasoning for not yet giving Maddison his England debut makes sense, even if not everyone agrees with it. For Leicester City, he mostly plays as a number 10 or out wide on the left - he has relatively little experience as a number 8 at the top level. However, he is more than capable of fulfilling this role if asked to. With a ball-striking technique as pristine as his immaculately maintained quiff, Maddison would be this team's creative hub.


Maddison and Grealish. A poundshop version of the Gerrard - Lampard conundrum. Slightly different players, one more of a dribbler, but still too similar to play in the same midfield. That's the sort of thing that Paul Merson and Liam Rosenior would discuss on The Debate if this team were ever assembled in real life. But as I'm in charge, I'm going to ignore this problem, because with Nobes behind them, they will have free rein to wreak havoc.

END_OF_DOCUMENT_TOKEN_TO_BE_REPLACED

It's likely that Grealish's persistent exclusion from England squads is rooted the same reasons that have seen Maddison left out. While he plays as an attack-minded number 8 for Aston Villa, the floppy haired playmaker does not have the defensive nouse that Southgate appears to want in his central midfielders. That, and the fact that there are plenty of other players competing for that position: Ross Barkley (lol), Mason Mount, Dele Alli and Harry Winks to name a few.

A player so 'underrated' that he's become borderline overrated, but still makes it into this team. Albrighton is an old-fashioned winger; not the most incredible dribbler, but exceptional at gaining half a yard of space and placing a curling cross on a six-pence for an onrushing striker. A modern, nowhere near as good remake of the Neville & Beckham partnership, Wan-Bissaka and Albrighton would, in theory at least, combine well to create the necessary space to rain crosses down on the opposition's penalty area.

He might have the name of a 40-year-old estate agent with wet-look gel in his hair and a suit shinier than a Twix wrapper, but Harvey Barnes is one of the most exciting emerging talents in the Premier League. A powerful dribbler with an eye for goal, he slots in perfectly on the left wing in this team, combining with the overlapping Ryan Sessegnon.

As I wrote a few weeks ago, Ashley Barnes is magnificent. Combining the four components of any top striker - brains, brawn, skill and shithousery, Barnes was overlooked for a long time as one of the league's best forwards outside the 'Big Six' (to be fair, he'd probably start for Manchester United right now.) Imagine him running onto Albrighton's crosses. Making decoy runs to draw defenders out of position for Maddison to take long range shots. Holding the ball up before laying it onto Grealish, who tip-toes through a helpless defence. It's the stuff of dreams.

(No, he's never played for Austria. Yes, he could still play for England.)

"He's a shithouse. He's an antagoniser. He'll be at you, chewing in your ear all the game."

Should Ashley Barnes be in the England squad? We asked @BurnleyOfficial fans what they think #utc #twitterclarets pic.twitter.com/N2cJS3mtJy

Would this uncapped XI give the current England first team a good game? Probably. Would they win? Probably not, that's why they've not been capped. But still, it'd be fun to watch, wouldn't it?


popular
Sympathy for the devils? Why Manchester United don't deserve your pity
THE JOE FRIDAY PUB QUIZ: WEEK 175
A foolproof guide to actually beating Liverpool this season
Tickets for UFC London are about to go on sale
Here's how to see who's been taking screenshots of your Instagram Stories
WWE stars reveal the most painful things that have ever happened to them
This is how much time most men need after orgasm before they're ready for another round