The Spurs vs United match was broadcast across Iranian state television this past weekend, but the programming was constantly interrupted on more than 100 occasions due to cultural, religious and gender-related reasons, specifically. 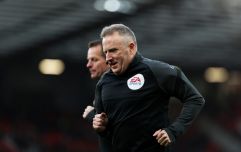 Referees set to train with Premier League clubs from next season

END_OF_DOCUMENT_TOKEN_TO_BE_REPLACED

The nationwide televising of the game had to be censored for showing a woman wearing shorts and having her hair on show. Gender laws and inequalities remain a constant debate in the country, with women having significantly fewer rights than men.

The assistant referee for the match was Sian Massey-Ellis; the 35-year-old referee has been officiating games in the Premier League since 2010 and made history in 2019 when she became the first female referee to officiate a men's European competition fixture. She was also the referee whom Sergio Aguero grabbed earlier this season when complaining over a decision.

As she has so many times over the past decade, Massey-Ellis was adjudicating offsides and aiding the first official's decision throughout the game. While there is no issue depicting linesmen wearing the usual referees' jersey and shorts, it was deemed inappropriate to show a woman doing the same by the Islamic Republic of Iran Broadcasting (IRIB). 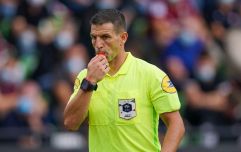 END_OF_DOCUMENT_TOKEN_TO_BE_REPLACED

My Stealthy Freedom is a gender equality group in Iran that campaigns for causes such as the removal of the compulsory hijab. They noted the censored programming, showing comparative examples of the Iranian broadcasts versus the rest of the world's

In the post, they stated that "The television censors were rattled by the presence of a female referee in shorts. Their solution was to cut away from the live action to views of London’s backstreets".

They went on to state that this "crude" approach "made a mockery of the game" and only further highlighted "the country’s draconian laws". This isn't the first time it has happened either.

Broadcasts of Bundesliga and World Cup games in Iran have been censored for showing women in supposedly 'revealing' clothing; back in 2017, they even drew on fake clothing to cover up Charlize Theron's bare skin at the Oscars.