Ahead of their match against Arsenal, Manchester City's players were keen to show İlkay Gündoğan that their thoughts were with him following the season-ending knee injury he suffered in midweek.

The German international damaged ligaments against Watford on Wednesday, just months after recovering from the dislocated kneecap that ruled him out of the opening weeks of the season.

Each City player took to the field in shirts with Gündoğan's name and squad number on Sunday afternoon, a gesture that was widely mocked by many watching the game.

Despite the former Borussia Dortmund midfielder suffering more than his fair share of injury woes in recent years, plenty pointed out that a few ruptured knee ligaments weren't enough to put his life in danger.

After the game, Gündoğan confirmed that he was indeed very much alive and well as he tweeted his congratulations to the team on their 2-1 victory.

Thanks to my teammates 👏👏🏽 & of course - congrats to my boys to this crucial win against #AFC👍 PS: Don't worry - I'm still alive 😉 #MCIARS pic.twitter.com/det9q7C8Wp 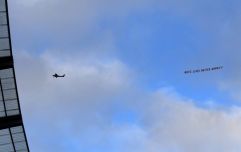 END_OF_DOCUMENT_TOKEN_TO_BE_REPLACED

A relief to everyone...

City's win over Arsenal lifts them to second in the league table, above Arsene Wenger's side and Liverpool, who play Everton on Monday night.

They now face a trip to Hull City on Boxing Day, before facing Liverpool at Anfield on New Year's Eve.


popular
QUIZ: Identify 99 movies from the 90s by a single image
The JOE Friday Pub Quiz: Week 199
QUIZ: Identify these retro football kit sponsors
Only the most driven and devoted will get full marks in our Roy Keane quiz
QUIZ: Identify the brand from just its slogan
QUIZ: Can you identify the ice lolly that's in black and white?
Who is the most handsome footballer in the Premier League?