The RB Leipzig centre back is set to move to Merseyside

Ibrahima Konate has been monitored by a number of high profile clubs over the last 18 months or so. Alongside centre-back partner, Dayot Upamecano - who has also been linked with moves to Liverpool, Man United, Bayern and so on - they have looked like one of the most desirable young defensive duos in world football.

END_OF_DOCUMENT_TOKEN_TO_BE_REPLACED

After lots of speculation, it appears there is finally some movement, as The Athletic have confirmed in an exclusive that Liverpool are now finalising a deal to sign Konate this summer. The negotiations are believed to be in advanced stages and the fee is around £34 million (€40m). Major moves from sporting director, Michael Edwards.

It looks like Michael Edwards has done it again.#LFC reportedly in the final stages of a deal to sign Ibrahima Konaté - one of the most sought-after defenders in world football. pic.twitter.com/9SGI8CkSaa

While there is still clearly work to be done, "if everything goes to plan, it would enable Konate to be added to Liverpool’s ranks at the soonest opportunity, which may prove all the more valuable for them in a summer featuring the delayed European Championship", says David Ornstein.

Ornstein shared his piece on Twitter this morning, as well as an analytics piece from colleague, Tom Orville, discussing exactly what it is the 21-year-old Frenchman will bring to the side:

“An extremely raw but promising young centre-back who, on paper, has all of the tools to become one of the best in Europe”

📈 @Worville analyses what Ibrahima ‘Ibu’ Konate would bring to Liverpool if he signs from RB Leipzig @TheAthleticUK #LFC #RBLeipzig https://t.co/FNsEEdwy2R 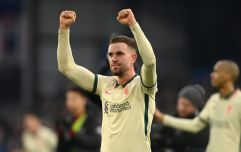 END_OF_DOCUMENT_TOKEN_TO_BE_REPLACED

Sources in Germany state that despite serious interest from other suitors, Liverpool have made the most significant progress on a player they see as "key to their recruitment plans". Standing at six feet four inches, he's certainly got the build you're looking for, though there are some concerns surrounding his injury record.

This will be the third defender signed in the last two windows, as Schalke’s Ozan Kabak came on loan with an option to buy and Preston’s Ben Davies (permanent) arrived as emergency signings when all senior centre-backs were out injured. Konate is likely to have been a more long-term target who also has a release clause should they need to pull the trigger.

Alongside Upamecano, Julian Nagelsmann's RB Leipzig have kept a league-leading 13 clean sheets this season - an impressive tally for two defenders no older than 22. The prospect of youngest Konate arriving on Merseyside and developing under the tutelage of Virgil van Dijk upon his return is certainly an exciting one.