Huddersfield equal unwanted record as they're relegated from Premier League

Not the sort of record any team wants

Huddersfield were beaten 2-0 by Crystal Palace on Saturday afternoon, with goals from Luka Milivojevic and Patrick van Aanholt consigning the Terriers to their 24th league defeat of the season.

It also consigned them to relegation in their second season in the Premier League, after a summer in which poor recruitment meant it would be a near impossible task for them to build on their impressive debut campaign.

As painful as relegation will be for the side, they will be confident of rebuilding and coming straight back up, but it is the record that they have equalled that may be one of the most difficult pills to swallow.

In being relegated with six games to go in the league season, Huddersfield have equalled the record of the 2007/08 Derby County side - the last team to do the same. 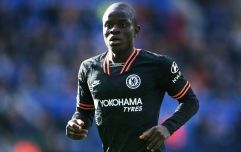 END_OF_DOCUMENT_TOKEN_TO_BE_REPLACED

Unsurprisingly they are also widely considered the very worst team to ever play in the Premier League.

Huddersfield aren't quite on that level; they already have three points more than Derby were after 38 games that season, and have won three games more.

Nonetheless, it's really never a good thing when you're trying to convince yourself that you're better than the worst team ever.


popular
Wesley Sneijder begins training with fifth tier Dutch side, eyeing up top level return
Serge Aurier's brother killed in shooting in Toulouse, France
QUIZ: Identify 99 movies from the 90s by a single image
The JOE Friday Pub Quiz: Week 199
The hardest quiz on The Simpsons that you'll ever take (Part One)
Max Holloway gesture after controversial UFC 251 loss transcends the sport
A definitive ranking of every swear word from worst to best