What happens after Tony Bellew vs. David Haye II?

Brought to you by William Hill

He may not want to admit it but David Haye's legacy hangs in the balance.

END_OF_DOCUMENT_TOKEN_TO_BE_REPLACED

Haye is just days away from the opportunity to prove that his defeat to perennial rival Tony Bellew last year was down to pure fluke, an unfortunate injury that seriously limited his ability to move.

While bad blood was the main factor in putting together the original fight in the first place, there's more than pride on the line for both men ahead of the rematch although that's undeniably one of the biggest motivators for each.

On Saturday night, Bellew will hope to make it 2-0 against 'The Hayemaker' and move on to the next chapter of his career, having put the rivalry to rest once and for all.

Various doors will open and close depending on the outcome of the this weekend's grudge rematch.

Despite his win last March, Bellew remains an underdog for the second meeting with Haye but there's no doubting that he has the ability to do it all over again.

'Bomber' was enjoying some success even prior to Haye's Achilles injury, for which the fight will always be remembered and he is the younger man so could well put Haye's career to bed with a devastating victory.

David Haye made the most of it last time round https://t.co/Gp0ie2f056

END_OF_DOCUMENT_TOKEN_TO_BE_REPLACED

If Bellew manages to stop the former cruiserweight and heavyweight world champion then it's difficult to see a scenario in which Haye, whose 38th birthday is on the horizon, is able to sell fans on a big fight and the most likely outcome will be retirement.

For Bellew, in this instance, a lucrative fight will be on the cards if he manages to solidify his status as a force to be reckoned with at heavyweight.

Obviously there are a lot of moving parts in the fight game but the names who Bellew will be linked with if he gets his hand raised will essentially boil down to Tyson Fury, Dillian Whyte, Andre Ward, Oleksandr Usyk, Murat Gassiev and, remarkably, Michael Bisping. 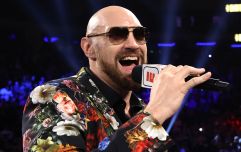 END_OF_DOCUMENT_TOKEN_TO_BE_REPLACED

'Bomber' has admitted that he will only entertain a fight with Fury before the undefeated heavyweight returns to his best form, meaning that he will be happy to share the ring with Fury in his second fight back after his lengthy hiatus but no more after that.

Whyte will always remain an option and while there seems to be a bit more mutual respect between the Matchroom fighters, the pair have exchanged words in the past.

Former light heavyweight champion Ward, who retired last year, has repeatedly hinted at a comeback in a higher weight division and has discussed a potential fight with Bellew in the past.

Former UFC middleweight champion Michael Bisping's name has been uttered by Bellew on several occasions and the Liverpool boxer remains open to the idea of a fight in the Octagon.

A fight with Fury makes the most sense and is 3/1 to take place in 2018. It's a bout that Matchroom chief Eddie Hearn would love to see happen as it would ramp up interest in a potential showdown between '2 Fast' and Anthony Joshua down the line while Bisping can most definitely be considered a longshot at 20/1.

One could also feasibly see Bellew return to cruiserweight in an attempt to reclaim the WBC title he never lost in a clash with Oleksandr Usyk.

This all depends on how the fight finishes.

A brutal knockout victory for Haye could potentially persuade Bellew to hang up his gloves because he's made no secret in the past of having concerns with regards to putting his family through the ordeal of watching him compete.

He's a family man and an intelligent man so if his lights are turned out by Haye, which is what bookmakers see as the most likely outcome, then don't be surprised to see Bellew call it a day.

Haye, just because of his previous accomplishments at heavyweight, possesses a higher profile and he's adamant that he could be rewarded with a world title shot if he exacts vengeance on 'Bomber'.

Haye is making huge strides on his road to recovery https://t.co/t8n3mOLJGC

As we noted above, there are a lot of moving parts and fights are getting booked all the time but if Anthony Joshua fights Deontay Wilder this year and Tyson Fury still needs a couple more tune-up fights then there remains a distinct possibility that Haye gets a shot at the Joshua vs. Wilder winner if he impresses in London this weekend.

On recent merit, he probably doesn't deserve a title shot but he can sell a fight like the best of them and world champions want that pay-per-view buyrate to be as high as possible.

Fans would complain that there are more worthy challengers than 'The Hayemaker' and he could well have to prove himself once more, potentially against the likes of a Dillian Whyte, who is 2/1 to fight Haye in 2018.

Just like a cross-sport clash between Bellew and Bisping would raise a few eyebrows, so too would the much-discussed boxing match between Haye and top UFC light heavyweight Jimi Manuwa.

While the shine has somewhat dulled over Manuwa's allure after back-to-back losses in the Octagon, the London 205lber told JOE last year that an agreement was in place to see him fight Haye.

Then there's always the word that has cemented the most epic of rivalries - trilogy.

Muhammad Ali vs. Joe Frazier, Micky Ward vs. Arturo Gatti, Riddick Bowe vs. Evander Holyfield. The list goes on and on.

Bellew vs. Haye II will have to play out a certain way to pique any interest in seeing them share the ring for a third time.

A decision victory for Haye or any controversy whatsoever will spark cries for a trilogy however a comprehensive Haye win will see this feud resigned to the record books.

To place a bet on how you see the bout playing out, visit WilliamHill.com