Any fivers in your wallet?

Before spending, you might want to closely examine them. If you happen to see Harry Kane's face staring back at you, your £5 note could actually be worth 50 grand.

Micro-engraver Graham Short has etched 5mm portraits of the England captain - along with the words 'World Cup Golden Boot Winner 2018' - on six fivers to commemorate the striker finishing as the top goalscorer in Russia earlier this summer. As pointed out by The Mirror, experts value each note at upwards of £50,000.

According to Short, one of the notes has been gifted to Kane while another has been presented to the Football Association. Of the remaining four, Short spent one in the West Midlands village of Meriden, another in Edinburgh and one in Merthyr Tydfil, Wales. He intends to spend the last of the six fivers somewhere in Northern Ireland later this week.


"I was watching the World Cup, as many people were, and it looked like Harry Kane would get the Golden Boot and when he did I started thinking it would be great to mark that by putting his portrait on a £5 note and got to work," Short explained. 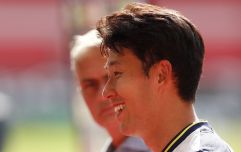 END_OF_DOCUMENT_TOKEN_TO_BE_REPLACED

"I spent the first Harry Kane note in Meriden, which is the centre of England, only a few miles from the M40 and M42, and so that note could travel in any direction.

"I spent one in Edinburgh near the coffee shop where JK Rowling first went as a young mum and started writing about Harry Potter. I just liked the magical feeling of that."

Short was also responsible for engraving tiny images of Jane Austen on four fivers that entered circulation two years ago. Three of them were found relatively soon after their release, although the fourth has yet to be claimed.

You may also like
Football
Harry Kane misses start of pre-season training after he is quarantined
Sport
Rating every striker Jose Mourinho has coached since his Porto days
Sport
Is Spurs' inconsistency pushing Pochettino closer to Real Madrid?
Sport
Gareth Southgate to rest several key players in Nations League clash against the Netherlands
Football
Harry Kane to tell Gareth Southgate he is match fit for Nations League
Next Page