At long last, FIFA are taking a hard-line stance against socks

Sweden captain Andreas Granqvist, who played during his country's 2-0 World Cup quarter-final defeat to England on Saturday afternoon, is said to be facing a(nother) hefty fine from football's governing body for ignoring their requests to stop wearing a pair of Trusox socks. 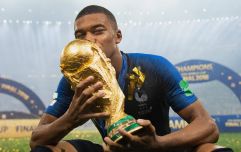 END_OF_DOCUMENT_TOKEN_TO_BE_REPLACED

According to The Sun (make of that what you will), the former Wigan Athletic defender has been wearing the socks - which are said to offer more grip - throughout the tournament. The report claims that some of the major sportswear companies have objected to the exposure being given to Trusox, which are made in Devon, causing FIFA to issue Granqvist with a £50,000 fine.

Clearly though, you can't put a price on a good pair of non-slippy socks, and the 33-year-old has ignored further warnings from Gianni Infantino and the gang not to wear them. As a result, they've been left with no option but to hit him with another 50 grand fine.

About time football started clamping down on really important stuff like this, we're sure you all agree.

Sweden's loss to England in Samara marked the end of their first World Cup campaign in 12 years. Having seen off Italy in a qualifier to seal their place in Russia, they topped their group ahead of Mexico, South Korea and reigning world champions, Germany. Their final goal at the tournament came in their last-16 win over Switzerland last week.