Arsenal midfielder Granit Xhaka has been the victim of racial abuse directed at him by season-ticket holders of the north London club, according to a new report.

END_OF_DOCUMENT_TOKEN_TO_BE_REPLACED

Swiss international Xhaka, 28, is of Albanian heritage, and has endured a strained relationship with supporters since his move to the Emirates in 2016.

A month-long study was conducted by data analysts Signify, which aimed to explore abuse of players on Twitter.

It discovered that Xhaka was the victim of 16 direct examples of racial abuse from fans who self-identified as Arsenal season-ticket holders.

In just 30 days, a little over 2,000 social media posts referring to Xhaka were examined in closer detail. Of these, 1,374 were seen as potentially abusive.

Over 50 per cent of the abuse directed at Xhaka occurred in the wake of Arsenal's 0-1 home defeat to Burnley, in which Xhaka was sent off in the 56th minute for clashing with Ashley Westwood.

Granit Xhaka has made over 150 appearances for Arsenal since joining in 2016. (Photo by Shaun Botterill/Getty Images) 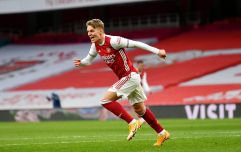 END_OF_DOCUMENT_TOKEN_TO_BE_REPLACED

A spokesperson for Twitter told Sky Sports News: "There is no room for racist abuse on Twitter and we are resolute in our commitment to ensure the football conversation on our service is safe for fans, players and everyone involved in the game."

Xhaka started his career in his native Switzerland with FC Basel, before spending four years in Germany with Borussia Monchengladbach. He subsequently joined Arsenal in 2016 for a fee in the region of £30-35 million.

He was appointed Arsenal captain in September 2019 following the departure of Laurent Koscielny, but the armband was handed to talismanic striker Pierre-Emerick Aubameyang just a month and a half later following an incident against Crystal Palace.

Xhaka was substituted in the 61st minute of that game, which drew ironic cheers, boos and jeers from the Gunners home crowd. He responded by sarcastically clapping supporters. 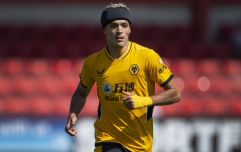 END_OF_DOCUMENT_TOKEN_TO_BE_REPLACED

Social media giants are facing renewed pressure to clamp down on abuse directed at players. Stoke City winger James McClean has recently spoken out about the threats his family have faced on Instagram, while Manchester United forward Anthony Martial was also victim of racial abuse following the draw against West Brom.