Not all members of England's 1986 squad are bitter, then

Former England icon Glenn Hoddle has shared a heartwarming memory of his time on the pitch alongside the late Diego Maradona.

END_OF_DOCUMENT_TOKEN_TO_BE_REPLACED

Maradona passed away yesterday aged 60. His death sparked an outpouring of grief for the greatest player that ever lived. Many shared clips of Maradona's most unforgettable moments, in particular his singlehanded dismantling of England's 1986 World Cup dreams.

His 'Hand of God' goal was followed by one of the greatest strikes in history - a dazzling, mazy run from inside his own half that culminated in a cool finish past the hapless Peter Shilton.

While some players on that pitch have forever held a grudge against the diminutive Argentinian, the same cannot be said for Hoddle - who lined up in the England midfield on that day 34 years ago.

Speaking to presenter Jake Humphrey on BT Sport's Europa League coverage this evening, Hoddle says he feels fortunate to have played on the same pitch as Maradona - despite the pain his goals inflicted on him as an Englishman.

"The ball was the interpreter between me and him, we just gelled."

Speaking about the two goals Maradona scored in quick succession, Hoddle said: "It was the rascal in him that did that [the first goal]. Then, the second goal he scored was just out of this world. In many ways, that summed up Diego. 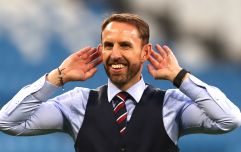 END_OF_DOCUMENT_TOKEN_TO_BE_REPLACED

"The first goal showed the little rascal in him, but then you have the genius in him - of what he did with that second goal."

Hoddle then recalled playing on the same side as Maradona in Ossie Ardiles' testimonial match.

"He was the greatest player, I think, that's ever touched the planet. As soon as we got on the pitch, the ball was the interpreter between me and him. We just gelled, it was quite an incredible evening and I loved every minute of it.

"It's a sad loss for football. He was a wonderful genius of a player."