Quite the headline, that.

AC Milan boss Gennaro Gattuso has attempted to explain why he ate a live snail prior to a crucial Champions League meeting with Manchester United.

Andrea Pirlo, who played alongside Gattuso in Milan's midfield between 2001 and 2011, claimed the former Rangers midfielder had eaten the snail ahead of the semi-final with United in 2007. He has discussed the incident in the past, explaining in the video below how he agreed to do it as long as his teammates each gave him €500. He later gave the money to four fitness coaches that were on internship with the club.

(He tells the story after the nine minute mark, shortly after his tale of how Paul Gascoigne welcomed him to Glasgow by shitting in his socks.)

Asked about the snail incident ahead of Wednesday's Coppa Italia final against Serie A champions Juventus, the 40-year-old, who threatened to knock one Milan wonderkid's teeth out recently, provided something in the way of an explanation for why he had done it.

"I've done worse things than eating a snail alive," Gattuso said during Tuesday's press conference. "The point is, it was not about the snail anyway. 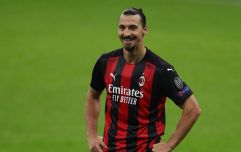 END_OF_DOCUMENT_TOKEN_TO_BE_REPLACED

"I'm saying this because my point is that in that particular moment there was need to do something to break the tension.

"Given that I have no problems doing anything and we were just few hours before the Champions League semi-final against Manchester United and there was a massive pressure on us."

Milan lost the first leg of that semi-final 3-2 at Old Trafford, but defeated United 3-0 in the second leg at the San Siro, booking their place in the Champions League final against Liverpool. Two Filippo Inzaghi goals in Athens were enough for Milan to beat the Merseyside club 2-1. This went some way to avenging their defeat in the Istanbul final in 2005, where the Italian club lost on penalties after surrendering a three-goal half-time lead.

"In that particular moment there was need to do something to break the tension."


popular
34 years on, Peter Shilton still doesn't understand the greatness of Maradona
A definitive ranking of every swear word from worst to best
Tyson Fury: Going bald is beautiful and should be embraced
James Maddison explains reason behind popular 'A' celebration
QUIZ: Can you name all of these Batman villains?
Celebrity Big Brother and AFTV star Heavy D dies, aged 43
QUIZ: How well do you know Karate Kid?