Neville tweeted the photo with the caption "To the Super League ?".

To The Super League ? pic.twitter.com/zcHbsJ0DG0 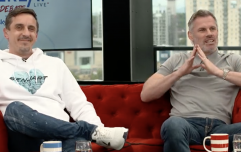 END_OF_DOCUMENT_TOKEN_TO_BE_REPLACED

Chelsea and Manchester City have already announced they plan to leave the league, with reports that the 12 founding members are having crisis talks about disbanding the league all together.

Neville had already made his feeling abundantly clear about the breakaway league during Sky's Super Sunday coverage, but was asked for his views on the subject again during Monday Night Football. 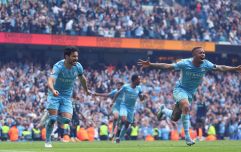 END_OF_DOCUMENT_TOKEN_TO_BE_REPLACED

Urging all the football community to set aside their allegiances and attempt to stop the proposal, Neville admitted that he felt "slightly complicit", having rarely spoken about the Glazer family since their 2005 takeover of Manchester United.

"I believe in a free market, generally in life, and I've often thought what's the answer to the Glazers? What takes them out? Russia? China? State money?

"I've stayed quiet on the basis that it's still Manchester United. I can still go and watch the lads play, I can be happy and I can be sad. I'm still watching football in this country.

"If they take dividends out, I can live with it slightly, but what I can't live with is attacking every football fan in this country.