Tottenham boss Mauricio Pochettino confronted referee Mike Dean after his side lost 2-1 at Burnley on Saturday - a result which all but ends their hopes of winning the Premier League title.

END_OF_DOCUMENT_TOKEN_TO_BE_REPLACED

Spurs had fallen behind twice at Turf Moor in the second half, the first time via a Chris Wood header which came from a corner which appeared to have been wrongly awarded. The ball went out of play after a sliding challenge between Burnley's Jeff Hendrick and Spurs' Jan Vertonghen - replays showing the final touch had appeared to come off the Irishman.

Though Harry Kane later equalised on his first game back from injury, Ashley Barnes was able to score his side's winner from close range with seven minutes of normal time remaining.

At full-time, Pochettino, flanked by some members of his coaching staff, made a point of seeking out Dean and his officials.

The former Southampton boss appeared to repeatedly be saying “you know very well," to Dean before he was eventually pulled away from the referee and making his way to the dressing room.

Mauricio Pochettino was NOT happy with Mike Dean at full time! 🤯 pic.twitter.com/w0r0FTRUiI 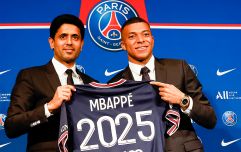 END_OF_DOCUMENT_TOKEN_TO_BE_REPLACED

Pochettino was asked about the incident with Dean during a post-match interview with Sky Sports but declined to go into details. He did, however, admit that his reaction was out of character.

The defeat leaves Spurs five points behind Premier League leaders Manchester City and Liverpool, who play their game in hand against Manchester United at Old Trafford on Sunday afternoon.

Burnley, meanwhile, are temporarily up to 13th with their victory.

popular
Bette Midler wants the US to ban Viagra because it’s ‘God’s will’ to have a ‘limp d**k’
Travis Barker’s daughter shares picture of Blink-182 star in hospital bed - tells fans to ‘send your prayers’
Police hunt for two 'laughing' men who kissed three-year-old girl in front of distressed mum
British teen says she was raped in Majorca hotel by 'famous actor and musician'
Father takes his own life after 18-month-old found dead in hot car
'You're disgusting': Prince William roars at photographer who was 'stalking' his family
Drugs 'that could let humans live to 200' are being developed, scientist says
You may also like
Sport
Mauricio Pochettino to be replaced by Antonio Conte at PSG, reports claim
Sport
How Man United could line out if Mauricio Pochettino is appointed manager
Sport
Wayne Rooney backs Mauricio Pochettino to become next Manchester United manager
Sport
Manchester United dressing room 'split' over potential appointment of Erik ten Hag
Sport
Paul Scholes names Man Utd manager he'd prefer to Pochettino or Ten Hag
Next Page