Didier Deschamps has come out in defence of his star midfielder

France go into this summer's World Cup as one of the favourites, with a squad full of young, exciting talent. Their manager Didier Deschamps faces the challenge of fitting the likes of Antoine Griezmann, Ousmane Dembélé, Kylian Mbappé and Paul Pogba into the same team, while not leaving N'golo Kanté with all the defensive duties.

Much has been said of Paul Pogba and the difficulty of fitting him into a team with several other top level attackers. As we've seen at United this season, he has struggled in a double pivot, often vacating his position, such is his natural tendency to roam forward.

Deschamps' solution to this appears to be to play him in his favoured position on the left of a midfield three, with Kanté next to him and one of Corentin Tolisso or Steven N'Zonzi behind them. This shape worked in France's friendly against Italy but some fans were still not satisfied with Paul Pogba's performance.

Pogba was subject to disapproving whistles when he played a misplaced pass and again when he was substituted off with five minutes remaining.

Deschamps has come out in defence of Pogba, claiming it wasn't just him who was subject to the criticism from the crowd.

"The whistles for Paul Pogba? It's not just for him, at one point we kept the ball and they whistled too," France manager Deschamps told TF1. "It had already happened.


"The public also prefers to score five, six goals but it's high level, there is a team in front of us. The players do the right thing. 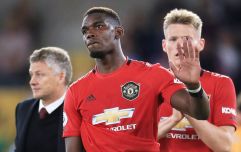 END_OF_DOCUMENT_TOKEN_TO_BE_REPLACED

"Are they affected or not, I do not know... I will not remember that, but if it maybe could not be the case, it would be better."

One of Pogba's closest friends in the squad, Antoine Griezmann also offered his support to the Manchester United midfielder, saying:

"The whistles are part of football, you have to stay tough mentally. We're all playing for the same shirt. He plays his game, you're used to him scoring. We don't expect that from him, only that he rotates the ball and plays for the team.

"He has had a difficult season at Manchester United but he has a lot of confidence in himself."

France have one more friendly against the USA before they travel to the World Cup in Russia, where they are expected to top their group which features Australia, Peru and Denmark.

You may also like
Sport
Signings - not success - are becoming the real trophies in the new football reality
Sport
Manchester United fans on whether the club should sell or keep Paul Pogba
Football
An in-depth analysis of all the beef in the Man Utd preseason video
Sport
Sergej Milinkovic-Savic: the Spanish-born Serbian who could replace Paul Pogba
Sport
Manchester United need to recognise Paul Pogba for the player he really is
Next Page