The international break made us do it.

Listen, in theory international football is great. The best players from each country coming together to compete against one another for world domination. It's like Avengers Assemble but with sillier haircuts. If it didn't exist they'd have to invent it. 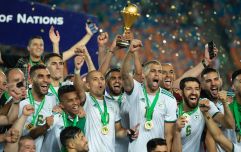 Africa Cup of Nations: Where and how to watch every game

END_OF_DOCUMENT_TOKEN_TO_BE_REPLACED

Alas in reality, it's a bit rubbish. And by 'a bit' we mean 'a lot'. It can be mind-numbingly dull, and an inconvenient break from the real business of Premier League football most of us actually care about. Most fans just don't want their players injured.

We'll be straight with you, it's a bit of an inconvenience for us too. We want to inform and entertain you with the latest news and views about the beautiful game, but it's slim pickings during the 'interlull'. So we've had to resort to this. It's not our fault.

Utilising the only real options open to us - photoshop skills and very troubled minds - we decided to replace regulations size 5 balls in football images with other objects. Because basically, why not? It's the international break so blame that, not us...

Does his vanity know no limit? Angered by the attention this loveable feline is receiving, Ronaldo does the unthinkable...

Not to be outdone, Ronaldo's great rival Messi retaliates in kind by absolutely twatting a rogue Pokémon...

Neymar kicking an unexploded bomb out of harm's way

Not all heroes wear capes, but they do sometimes have peroxide blonde hair. Ney acts because someone ruddy has to...

Only the enigmatic Swede could do away with a fresh canine poo with such style. No plastic bag required. Classic Zlatan...

Smoking kills! Consider Suarez launching his last ever packet of fags firmly into his past as a warning kids - don't do it!

Let's face it, after his reckless lunge on John O'Shea, Bale is capable of anything. He even called him Len, the little prick!

He's a smart cookie is Becks. Kicking a piñata will only increase his popularity amongst Latino soccer fans in the States. Someone give him a knighthood!

We've all heard the term: 'A dog is for life, not just for Christmas'. Well according to Eden, it's also for curling into the top corner with the keeper helpless...

Cesc Fabregas kicking himself for missing an open goal

This one's especially for Arsenal fans. Fabregas kicking Fabregas in the ultimate act of self-flagellation (we really hope that means what we think it means...)

Yep. We've probably gone too far with this one, haven't we? Roll on the return of proper football...

popular
Drivers need to be aware of change to roundabout rules from next week
West Ham fan's laughable attempt to prove Edinson Cavani was offside goes viral
Non-league footballer Christian Rowe dies aged 19
Fans outraged by controversial VAR penalty call as Liverpool beat Crystal Palace
Blaze at Guy Ritchie's London pub for second time in less than seven months
I donated a kidney to my boyfriend – then he brutally dumped me
Elon Musk and Jeff Bezos lose billions as tech stocks and crypto plummet
You may also like
Sport
The worst crimes against shirt numbers in football history XI
Sport
Messi's PSG contract includes 'special Argentina clause' after demands from player
Sport
England players’ families pay pen emotional letters ahead of final
Sport
Euro 2020: Everything you need to know
Entertainment
All Euro 2020 Fixtures: When & Where to Watch Them
Next Page