There are few things in life more enjoyable than watching a performance which combines true excellence, the right timing and expectations met.

END_OF_DOCUMENT_TOKEN_TO_BE_REPLACED

It is this, watching a team deal with unbearable pressure by simply playing with flair and fun, which makes football what it is.

In fact, it is so good, such food for the soul, that literally the only thing better is its exact antithesis.

It may well be the greatest thing in football, and the greatest example in modern World Cup history is Brazil’s match against Germany in 2014.

Brazil came into the game playing as one expected. They had struggled in some games but approached each match and especially their national anthem with the passion of 11 Joe Harts who had recently finished drinking three cans of Red Bull each.

But it had taken its toll. This was not a team enthusiastically playing its way through the competition with the usual Samba jois de vivre, it was a team carrying the weight of history, of country, of football itself, on its shoulders.

END_OF_DOCUMENT_TOKEN_TO_BE_REPLACED

It is often advised in life to extricate oneself from the emotion of moments, in a bid to truly excel. But this was not an option for Brazil. They felt compelled to fight for every moment, for every note of the national anthem, and it left them with the emotional and physical energy levels of a festival goer reaching the fourth consecutive day of treating their body like a human bin. They could rest when they're dead.

This was a team which had rallied around the memory of a fallen comrade, the late Neymar Junior; a player of immense quality who encapsulated what it was to be a Brazilian footballer, the one who was supposed to bring football home, but ended up being cruelly taken away - like so many others - by a Colombian knee to the back.

Had Neymar not been mowed down like that, things may have been different. As it was, Brazil used his memory to fuel them forward, Julio Cesar and David Luiz holding his shirt aloft at every moment of the day to remind people what it was all about. 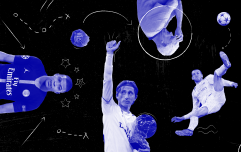 END_OF_DOCUMENT_TOKEN_TO_BE_REPLACED

Unfortunately, using the memory of something as fuel is not particularly efficient, especially compared to, let's say, actual fuel. And this team was always destined to burn out, left on the side of the road after attempting to race a Volkswagen Beetle.

Belo Horizonte. 29 minutes in. 5-0 down. It was a bloodbath. Bodies lay scattered, eardrums throbbed as those still standing sought to find those closest to them and retreat to safe ground. But there was no safe ground. There was nowhere to run.

61 minutes later it was 7-1. Oscar had scored a late consolation for Brazil, but such was the beating that if anything his goal made the scoreline look worse.

To play is to lose. That is the only certainty in football. It builds character and forms relationships; bonds which will help guide you to future successes. Defeat can do that.

It was Homer Simpson killing the Krusty Burglar, but not in the car park of Krusty Burger. This took place in the living room of every football fan on earth. You wanted to look away in the vein hope that perhaps it would go away. But every time you looked back, they'd scored again.

It was agonising and brilliant and painful and hilarious. It was anticlimactic and better than you could have imagined, all at once. It was football.

Brazil had come into this World Cup wanting to be remembered, to go down in history as a team which made its mark in its own back garden, which made the world take notice. In the end, they got their wish.