On Thursday night, Fenerbahce player Muhammed Gumuskaya was left puzzled after trying to kiss a badge that wasn't there. Thanks to Puma's new designs, which sees the crest on the back of the shirt, the iconic kissing of the badge is no longer possible unless players happen to be contortionists. 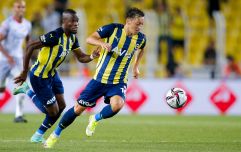 END_OF_DOCUMENT_TOKEN_TO_BE_REPLACED

The Turkish kit, along with current Premier League champions Manchester City, are among ten European clubs to wear the new design from Puma for their third jersey, which will be worn in competitions in the 2021/22 season.

Gumuskaya secured a win for Fenerbahce against Finland's HJK, with the end score being 1-0. As he went to kiss the badge, something adopted through much of the football world, the badge was no longer there. Puma has repositioned the badge on the back of the shirt, just beneath the collar.

Puma describes the design as 'progressive and refreshing'.

Watching Gumuskaya search for the badge is comparable to trying to find your phone in a bed of blankets, cushions, and hastily folded clothes.

"When you wanna kiss your club badge but you are wearing a PUMA jersey," writes one person on Twitter.