"Johnny always used to say to Cheika, 'You should have played me 10 and Felipe 12!'"

Images from England's training session, at Bagshot, on Tuesday evening got everyone suitably excited. The legendary Jonny Wilkinson was in for the session and was pictured with Marcus Smith.

END_OF_DOCUMENT_TOKEN_TO_BE_REPLACED

Having made his Test debut during the summer, the Harlequins outhalf is now set for his fifth international outing against the Springboks. Such is is form, and potential, that Smith started in the 10 jersey against Australia while Owen Farrell started at inside centre.

Back when he was coming up through the ranks with Leinster, Johnny Sexton would have coach Michael Cheika's head wrecked with how they could really get the best out of teammate Felipe Contepomi.

Sexton felt he should be given the 10 jersey while the Argentina legend could easily shift to inside centre and operate as a play-making No.12. We're not sure if he ever said this too loudly around Gordon D'Arcy, who had a handy midfield partnership going with Brian O'Driscoll but, knowing Sexton, he probably did.

Almost 15 years on from those discussions, we are seeing more and more out-halves being moved into midfield to unlock defences, at club and Test level. The introduction of the 50/22 kick is now seeing teams play 13-2 defensive spreads, as opposed to 14-1, and playmakers are now having an even greater say in matters.

On the latest House of Rugby URC [LISTEN from 42:30 below] Leinster and Argentina legend Felipe Contepomi spoke about the benefits of including an extra playmaker in your backline.

Marcus Smith talks with Jonny Wilkinson, in Bagshot, during an England training session ahead of their upcoming match against South Africa. (Photo by David Rogers/Getty Images)

END_OF_DOCUMENT_TOKEN_TO_BE_REPLACED

House of Rugby host Jason Hennessy, during a discussion on England's 32-15 win over the Wallabies, noted that Marcus Smith 'has all the tools' to make it as a Test outhalf.

Contepomi fully agreed, and expanded on that dual playmaker role at 10/12. He commented:

"Yeah, Marcus is a very skilful player. The big question was, is he up for that level. That international is another [step]. He has to be composed, and so on. And he's showing he's up for it; definitely he's up for it.

"And the same thing with maybe George Ford. Eddie Jones knows what he can get off George Ford, who is having a a really good season, who is playing really good rugby. And why he's not in the team, you do ask yourself 'Why?' But maybe Eddie knows what he can get from him. Can he get something similar from Marcus Smith? That's probably what he's trying. And they are combining really well.

"That's been a big bet on the English team from Eddie Jones - playing with two playmakers, you know. And having Owen Farrell moved to 12, when he is probably one of the best out-halves in the world... and he has moved into 12 to play with Ford, and now finding this with Marcus Smith getting in there. You can see it works, this combination for them with two playmakers." 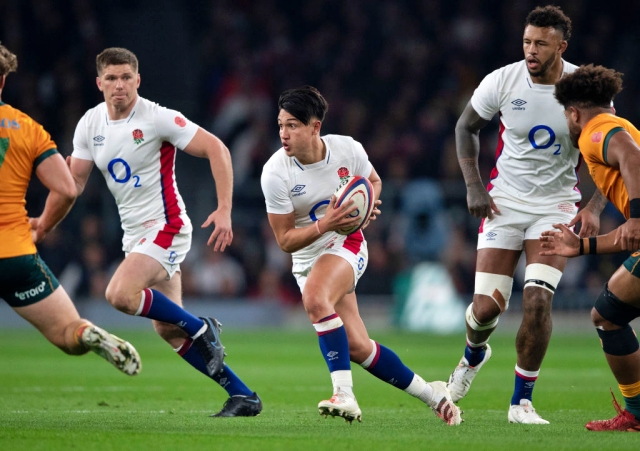 Marcus Smith, watched on by Owen Farrell and Courtney Lawes, makes a carry against Australia. (Photo by Visionhaus/Getty Images)

During a recent interview, former Munster and Ireland outhalf Ronan O'Gara said he did not understand why some people are getting hung up on just the 10 and 12 making all the plays.

"I think a lot of people are fascinated with what they call two playmakers," he said. "I would use different language as a coach.

"Nowadays, when you're playing a phase game, there's enormous responsibility on the two players that aren't in the ruck, they're looking to run lines off the guy with the ball.

"The game is changing very quickly in the fact that you're trying to empower your players to make decisions without the ball that can have a huge impact for the next phase. It makes it so interesting coach.

"If you're looking to set up say Johnny Sexton with Hugo Keenan at 15, or Joey Carbery at 15, I never understood that, or never followed that. The role of Keenan, of Bundee Aki, of Ringrose, of Conway - wingers are so important in the game.

"They have such importance in the fact that they're always nearly inside... A right winger is always inside the number 10 when they're number 10 is near the right touchline... Unless he goes roaming. If he's going roaming, and has seen something, he needs to be able to communicate that. There are always three or four backs that are freely available, that should be looking as playmakers, and seeing where the space is."

"That for me," added the La Rochelle head coach, "is where huge growth can be made in any team in the fact that if your 10 is looking for space, great.

"But imagine if your two wingers, and centres, and 15, and your back row, and your hooker playing wide is looking for space - it gives a whole new dimension to the team. It's something that if you can get your players to understand, you can really grow your team."